Showing posts from December 8, 2013
Show all

By --Victor - December 14, 2013
Well, the XBOX One is now available, and we decided to test out Crimson Dragon using the system's "Game DVR" feature. Not bad at all. There is a 5 minute limit, but we managed to hit a now loading screen after almost 5 minutes! Stitched them together and we have the video above! Despite the negative reviews, the game plays a lot like Panzer Dragon, which is what I was expecting after playing it at SDCC. Considering members from Team Andromeda were a part of the team behind the game, it's easy to see what they were going for. A Panzer Dragoon game in spirit. Now Sega, Panzer Dragoon Orta ran on the original Xbox, which did have an x86 CPU (Intel Celeron @ 733Mhz), so how about an HD update? Now, I do miss the "Panzerese" language from Panzer Dragoon Saga. Update: Well, InGrooves, not Content OWNERS Microsoft or Grounding have filed and won a copyright claim. Our options were to allow them to profit off the content owners work, appeal and if we lost a
Read more 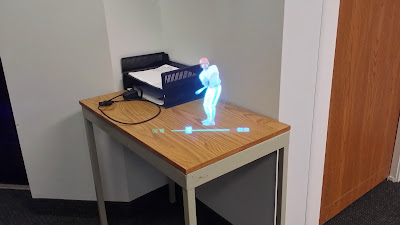 So what you see above is what Vuzix's and Nokia's new technology is capable of. A holographic type overlay that is very "Start Wars"sie! The best part? It can be used with standard glasses frames. For those of us that have prescription glasses, this is awesome news! We already had a Vuzix interview scheduled for CES, so we will be able to see this in action! Read the full press release after the break!
Read more
More posts