Showing posts from February 1, 2015
Show all

In addition to Hyperdevotion Noire info, Idea Factory International also released some new screenshots of Hyperdimension Neptunia U's English dialog. Coming this Spring to the PlayStation Vita, this game is also a departure from the RPGs that made the Neptunia games popular, dropping them into a hack-n-slash on the go game. We can't wait! More screenshots after the break
Read more

Criminal Girls: Invite Only Now Available For The Vita 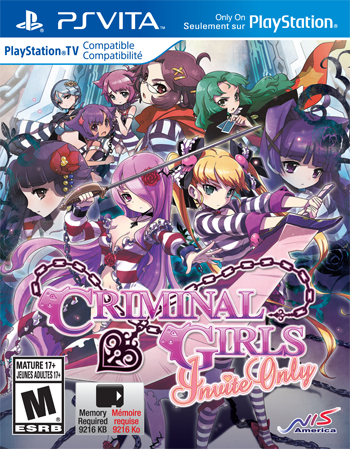 In the mood to help seven females condemned to Hell find the right path to redemption? No? Then skip over to the next story. Criminal Girls: Invite only is an update to the previously released only in Japan PSP title, with added content to boot! Available both Digitally and in stores for $39.99 or $51.99 for the LE that includes an artbook, soundtrack and key chain. Find the full press release after the break
Read more

DOA 5 Last Round US Launch Trailer

Well, it's just about time for the Last Round of DOA 5! Koei Tecmo released the launch trailer today while also confirming a delay for the PC version. On February 17, Xbox 360, Xbox One, PlayStation 3 and PlayStation 4 fighters can beat the living snot out of each other one last time. DOA 5 Last Round Launch Trailer Full press release after the break
Read more
More posts