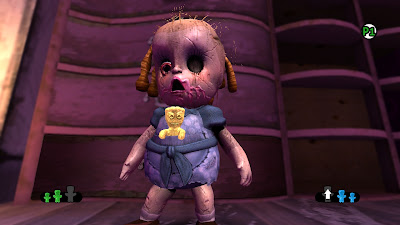 Capcom sent us a press release today announcing the release of Sour Patch Kids: World Gone Sour for both the X-Box 360, PC and Playstation 3. All for the low price of $4.99 (400 XBox points)! What are you waiting for? Go download it before they get sour! Wow...that was a terrible pun.

Full PR after the jump.

SAN MATEO, Calif. — April 11, 2012 — Capcom®, a leading worldwide developer and publisher of video games, today announced that World Gone Sour™ is now available for download on PlayStation®Network and Xbox LIVE® Arcade for the Xbox 360® video game and entertainment system from Microsoft.  Based on the popular Sour Then Sweet® candy Sour Patch Kids®, World Gone Sour will put players in the role of a miniature lost piece of candy that sets off on a journey to find its ultimate destination – the human stomach.

Gamers traverse through a stylized human-sized world, guiding the tiny hero through unique locations such as the frozen tundra of the ice cream display, the hot griddle of sizzling hamburgers and popping popcorn, and the un-inviting spooky shed. Players must use a combination of jumps, twists and puzzle-solving using collected Sour Patch Kids found along the way to negotiate and overcome larger than life obstacles.

The console versions allow for two friends to team up for local co-op play and include support for global leaderboards as well as Microsoft Achievements and PlayStation® trophies. World Gone Sour is available now on PlayStation Network for $4.99 and on Xbox LIVE Arcade for Xbox 360 for 400 Microsoft Points. The game can also be downloaded on PC for $4.99.

###
ABOUT SOUR PATCH KIDS
Sour Patch candies were launched in 1985 and have long been a favorite among people of all ages.  Sour Patch is known for its "Sour Then Sweet taste sensation," in which the sour coating gives a real sour hit in the mouth, but quickly turns sweet to offer a satisfying candy treat. Today,  Sour Patch is the #1 selling all sour candy brand in the U.S. marketplace[1]. The  Sour Patch family of soft and chewy candy products includes  Sour Patch Kids,  Sour Patch Watermelon,  Sour Patch Kids Berries®, Sour Patch Extreme®,  and Sour Patch Xploderz®. To learn more about  Sour Patch Soft and Chewy Candy, visit www.sourpatch.com.

ABOUT CAPCOM
Capcom is a leading worldwide developer, publisher and distributor of interactive entertainment for game consoles, PCs, handheld and wireless devices.  Founded in 1983, the company has created hundreds of games, including best-selling franchises Resident Evil ®, Street Fighter ®, Mega Man ® and Devil May Cry ®. Capcom maintains operations in the U.S., U.K., France, Germany, Tokyo, Hong Kong and Korea, with corporate headquarters located in Osaka, Japan.  More information about Capcom and its products can be found at www.capcom.com or www.capcom-unity.com.