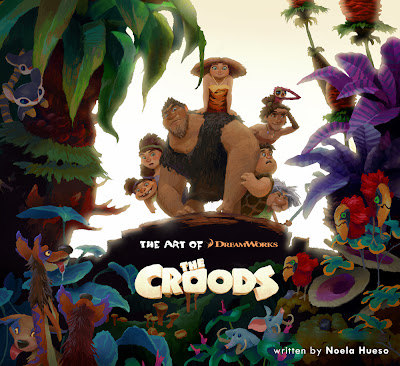 Dreamworks Animation has teamed up with Chris Sanders again to deliver unto us The Croods. They're just a modern stone-age family...juiced up on AWESOME! Hit the jump to read my thoughts on “The Croods”.

The first thing I can say about The Croods is that the character design is fantastic. Chris Sanders (a personal favorite of mine) is great at delivering compelling character designs with excellent silhouettes and LOTS of character. The Croods just continues to solidify this fact. 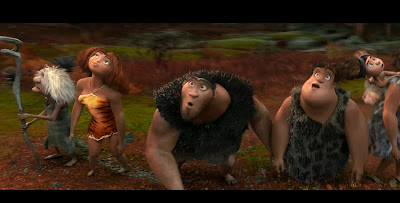 Grug, Eep, Guy and the rest of the gang are chock full of life. The work that went into this will probably be lost on a lot of people. The animation team painstakingly merged the movements of animals and humans to make the posture, poise and power of this prehistoric family something so natural that it will inevitably be overlooked by many. That’s a testament to the work done. It looks so natural that we can easily dismiss it’s complexity.

After the epicness that is How To Train Your Dragon, The Croods will seem a little tame. It’s family fare to be sure, but you won’t get the same edge of your seat excitement and wonder that Chris gave you in Dragon or Lilo and Stitch. That’s not to say that The Croods isn't good. Quite the opposite in fact. The Croods is a family picture through and through and if it doesn't elicit a hug for your kids by the end of the film, then you may need to have your soul checked for glitches. 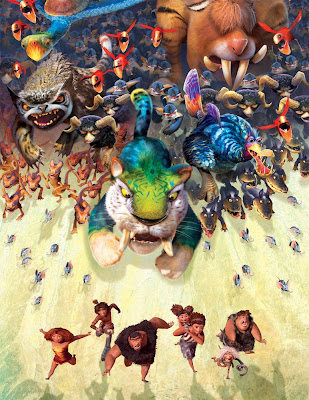 The Crood family isn't the only thing that Dreamworks masterfully rendered. The entire world is filled with dazzling creatures of all shapes and sizes. You will see mash-ups of all kinds of animals here. This movie is FAR from anything even remotely historically accurate, but they establish this pretty early on. The Croodacious period (as the creators refer to it) is more like an alternate reality. One filled with color and life and amazing visuals. 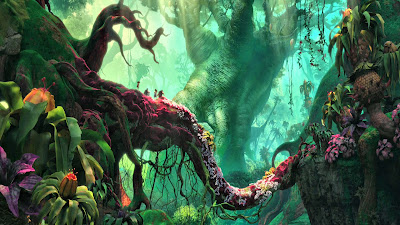 The one thing that I noticed that stood out to me was how amazing this movie looked. Depth of field and natural lighting all contributed to what are some of the best looking environments that I've ever seen rendered. The opening scene involves some ultra fast paced action that is easy to get caught up in, but take a minute to appreciate the camera work in this and you’ll see what makes The Croods so very special. 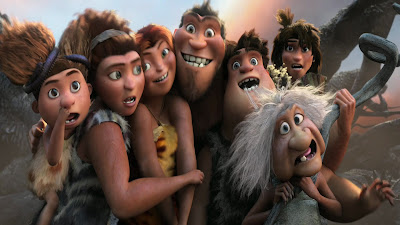 Nicolas Cage is Grug, the patriarch of the Crood family and is a caveman through and through. His clever tales of woe are always a treat and are a great way to ensure his family never reaches the perilous fates that all the surrounding Cavemen families have had. It takes “Overprotective” to a funny extreme.

Emma Stone plays Eep. The impetuous child who refuses to listen to daddy. Her actions lead the family on a wild adventure that changes them all. Eep’s Little Mermaid-like longing for something better is nothing new. But Emma makes Eep a lovable character who is just plain fun to watch. 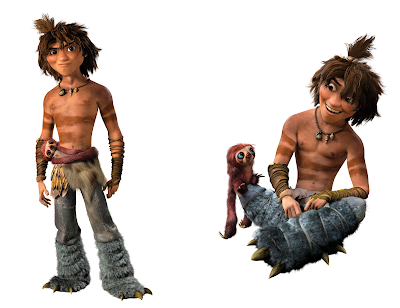 Ryan Reynolds voices Guy. The not-so-caveman guy who helps the Croods adjust to their new surroundings. A world opened up to them by the impending end-of-the-world. Referred to as “The End”. Ryan’s natural charisma seeps out of Guy’s character. It’s fun in every way that the Flintstones was always fun. Wacky inventions that seem WAY out of their time period.

One note of concern was a general lack of memorable music. I can honestly say that I can’t remember a single note from The Croods. This is something worth mentioning if only to those of you who are familiar with my reviews and how I often love to comment on soundtracks whenever possible. So basically, my only comment on The Croods music is that I don’t remember it. So take from that what you will. 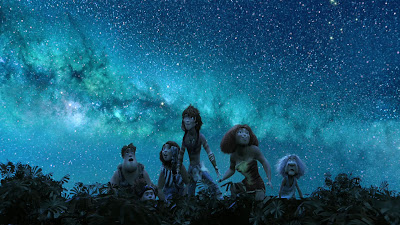 If you are looking for something fun and funny, The Croods is the family for you. It’s about a notch down from How To Train Your Dragon and about two notches down from Lilo and Stitch. But as I’ve come to learn over the years, if Chris Sanders is attached to a project, you can’t go wrong. 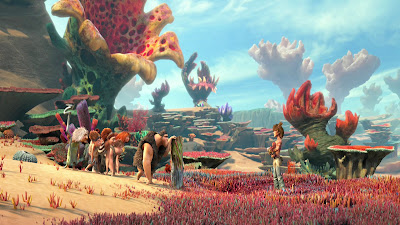 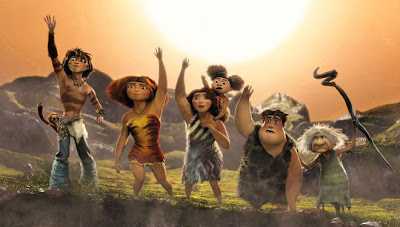