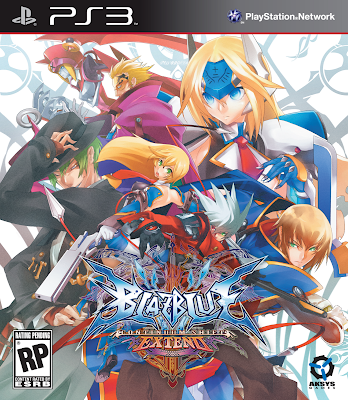 Do you crave the thrill of competitive fighting game madness? Well here's a news story for you. Aksys Games, makers of the sensational fighting game BlazBlue have announced the world's biggest BlazBlue tournament, BlazBlue Revolution.

U.S. Finals for the tournament will be held in southern California and the winners will get, hotel and airfare to Japan for BlazBlue Revolution!

Full press release after the jump.

The BlazBlue Revolution is Coming

Travel to Japan to compete against the most skilled BlazBlue players in the world!

Aksys Games will sponsor the winning team of the BlazBlue Revolution US Finals by providing full airfare and hotel accommodations to Japan, along with the pride of representing the United States in the BlazBlue Revolution Japan Finals. Not only that, but if the US Team is able to take the top spot in the Japanese Finals, an extra bonus prize will be awarded to the US Team! Now’s the time to grab two of your most trusted comrades and prepare for the revolution of a lifetime!

Full rules and event details will be announced on 12/17/2011 at www.blazbluerevolution.com. Until then, stay tuned for more information on BlazBlue Revolution at www.aksysgames.com.

Prize: Winning team will win full hotel and airfare to Japan and a spot in the Japan Finals

Restriction: Winners MUST have their US passport or equivalent document by 2/25. NO EXCEPTIONS.

*The US Team prize is a monetary award that will be given if the US Team is able to take the gold at the BlazBlue Revolution Japan Finals.

BlazBlue: Continuum Shift EXTEND has not been rated by the Entertainment Software Rating Board (ESRB). More information about Aksys Games, BlazBlue, BlazBlue Revolution can be found at www.aksysgames.com and www.blazbluerevolution.com.
About Aksys Games Localization Inc.

Founded in 2006 in Torrance, California, Aksys Games Localization, Inc. is a localization studio and visionary video game publisher specializing in the Japanese-to-English translation of games and committed to publishing unique, multicultural, high-quality interactive content for all current-generation platforms with its talented staff. Its lineup of games include the Record of Agarest War series, 9 Hours, 9 Persons, 9 Doors (Winning “Best Story/Writing” Awards from IGN and Nintendo Power), BIT.TRIP RUNNER (2011 Independent Games Festival (IGF) Excellence in Visual Arts award), and the acclaimed BlazBlue and Guilty Gear fighting game series. More information about Aksys Games and its products can be found on the company’s website, www.aksysgames.com.