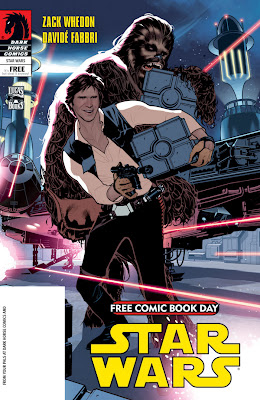 I know it's really early, but I'm excited about this announcement from Dark Horse for FREE COMIC BOOK DAY!

Yeah, Free Comic Book Day isn't until May 5th, but this announcement that just came down has me giddy as a school boy.

Buffy The Vampire Slayer, Star Wars, The Guild, and even my personal favorite, Serenity!

Check out the press release after the break

ONE HECK OF A SATURDAY!

NOVEMBER 23, MILWAUKIE, OR—Dark Horse rolls out the announcement of all four titles that will be featured in two different comics to be given away to thousands of fans on May 5, 2012.

First comes a special flip book featuring both Felicia Day’s gaming web series turned comic, The Guild, and Dark Horse’s best-selling comics continuation of Joss Whedon’s iconic television series Buffy the Vampire Slayer! Buffy has never needed a vacation as badly as she does now, with the world overrun with zompires and other fallout from Season 8. After an old friend suggests a relaxing getaway from all things that go bump in the night, it turns out to be harder than she could ever expect for a Slayer to get a day off!

Felicia Day, creator of The Guild, continues to bring on the funny with high jinks from her diverse group of gamers when the Guildies struggle to find a meeting place they can all agree on. A little in-game battle becomes the deciding factor, and the circle follows the decree of the winner: the beach?!

Next up is one of the biggest flip books we’ve ever published, when Zack Whedon brings you tales of the coolest guy in the galaxy and the most charming rebel in the ’verse! That’s right; we’ve paired Star Wars with Joss Whedon’s Serenity!

Han Solo and Chewbacca have a falling-out after a deal with their slickest—and shadiest—customer goes bad. But when the client gets designs on the Millennium Falcon, Han and Chewie present a united front that can’t be beat!

Meanwhile, Captain Malcolm “Mal” Reynolds is no stranger to jobs gone wrong himself. But when the chips are down, he’s able to rely on the amazing, odd, and diversely talented crew of Serenity.

Since 1986, Dark Horse Comics has proven to be a solid example of how integrity and innovation can help broaden a unique storytelling medium and establish a small, homegrown company as an industry giant. The company is known for the progressive and creator-friendly atmosphere it provides for writers and artists.  In addition to publishing comics from top talent like Frank Miller, Mike Mignola, Neil Gaiman, Gerard Way, Will Eisner, and best-selling prose author Janet Evanovich, Dark Horse has developed such successful characters as the Mask, Timecop, and the Occultist. Additionally, its highly successful line of comics and products based on popular properties includes Star Wars, Avatar: The Last Airbender, Buffy the Vampire Slayer, Aliens, Conan the Barbarian, Mass Effect, Serenity, and Domo. Today, Dark Horse Comics is the largest independent comic-book publisher in the United States and is recognized as both an innovator in the cause of creator rights and the comics industry’s leading publisher of licensed material.

About LucasFilm
Lucasfilm, the Lucasfilm logo, STAR WARS™ and related properties are trademarks and/or copyrights, in the United States and other countries, of Lucasfilm Ltd. and/or its affiliates. TM & © Lucasfilm Ltd.  All rights reserved.  All other trademarks and trade names are properties of their respective owners.
Buffy Comics Dark Horse Serenity Star Wars The Guild