Welcome to what we hope is the first of many Micro-Reviews. This segment will focus on small reviews on games and apps designs for mobile devices, such as cell phones and tablets.
Today's game is Shadowgun.  This is an AMAZING looking game from Madfinger Games, the studio that gave us Samurai 1 and II and they managed to one up their previous game by about 100%! Shadowgun is the story of a bounty hunter who looks A LOT like Bruce Willis and his mission to recover a scientist. It sounded simple until his ship was shot out of the sky and he was attacked by mutants and robots! 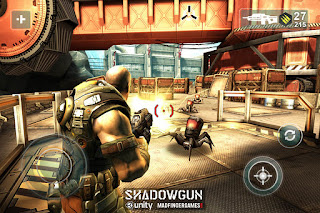 This game resembles the XBOX 360 classic Gears of War both visually and in gameplay. Released initially for the iPhone, iPad and Android Tegra based devices, Shadowgun is quite possibly one of the most visually amazing games I have ever seen on my tablet. The game easily looks and plays like a console game. Onscreen controls are dead one, and if you own an Android tablet with USB and HDMI ports, then you will be even happier! You can have the full console experience by plugging this into a TV and using a control pad for full console like gaming. I have used both an XBOX 360 wired controller as well as a PS3 Sixaxis on my Acer Iconia A500 tablet and the result had me shocked.
The best part about this game is the cost. For $6.49 in iTunes and $4.99 in the Android Market you are getting a console quality game at a mobile game price. A Tegra 3 version should be released shortly after Tegra 3 devices hit the market.

My rating for this game?