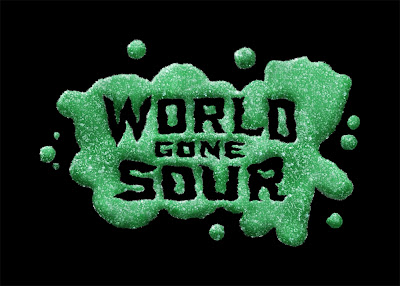 Capcom announced today that they will be producing a video game based around the Kraft Foods property, Sour Patch Kids entitled World Gone Sour.

The premise of the game is that you are a lost Sour Patch Kid and must make your way back to your brethren while avoiding the obstacles of the human sized world around you.

The game will cost approx. $5 to download and no release date has been announced as of yet.

For more information, see the full press release and screenshots after the jump.

SAN MATEO, Calif. — November 30, 2011 — Capcom®, a leading worldwide developer and publisher of video games, today announced that it will publish World Gone Sour™ on Xbox LIVE® Arcade for the Xbox 360® video game and entertainment system from Microsoft, PlayStation®Network and PC. Based on the popular Sour Then Sweet® candy Sour Patch Kids®, the game will take players on a journey from the perspective of a lost piece of candy finding its way to its ultimate destination – the human stomach.

“Sour Patch® is the #1 all sour candy brand in the U.S. but there is so much more to these iconic characters than just their sour exteriors and sweet interiors,” said Sebastian Genesio, Marketing Director for Sour Patch. “Bringing our ‘lost kids’ to life in video game form will add a new dimension to these lovable snacks. We feel this video game will resonate strongly with our core audience of teens and young adults.”

“Sour Patch has brought its brand to life in a unique experience that only video games can deliver,” said Christian Svensson, Senior Vice President, Planning & Strategy, Capcom Entertainment, Inc. “Whether you’re a fan of Sour Patch Kids or fun and engaging gameplay, World Gone Sour has something for all gamers to enjoy.”

Gamers will take on the miniature role of a lost Sour Patch Kid in a stylized human-sized world, guiding the hero through the sticky floors of a movie theater, across the counter of a concession stand, and other unique and oversized environments.  Joining forces with fellow lost Sour Patch Kids, players will use a combination of jumps, twists and puzzle-solving to negotiate and overcome larger than life obstacles. Along the way, they will battle unusual candy enemies, escape from deranged humans, and face-off against bizarre creatures including one very angry wad of sticky chewing gum.

Players will be able to team up with one friend for local co-op play. The console version will include support for global leaderboards, as well as Microsoft Achievements or PlayStation® trophies. World Gone Sour will be available this winter for $4.99 on PC and this spring on PlayStation®Network for $4.99 and on Xbox LIVE Arcade for 400 Microsoft Points.

In addition, the game will feature the recently released “World Gone Sour (The Lost Kids)” track from Grammy award-winning hip-hop artist Method Man. The journey of the Sour Patch Kids will include additional star personality with cheeky narrations by actor Creed Bratton (“The Office”), who will provide snack-sized quips and tidbits throughout the game.

ABOUT CAPCOM
Capcom is a leading worldwide developer, publisher and distributor of interactive entertainment for game consoles, PCs, handheld and wireless devices.  Founded in 1983, the company has created hundreds of games, including best-selling franchises Resident Evil ®, Street Fighter ®, Mega Man ® and Devil May Cry ®. Capcom maintains operations in the U.S., U.K., France, Germany, Tokyo, Hong Kong and Korea, with corporate headquarters located in Osaka, Japan.  More information about Capcom and its products can be found at www.capcom.com or www.capcom-unity.com.