Tekken Hybrid Released for the PS3 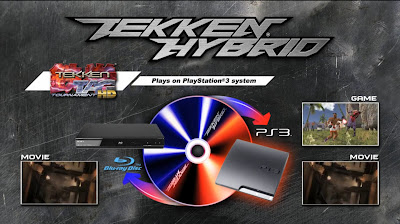 Tekken Hybrid can be found at your favorite game shop for $39.99 or in a $59.99 that includes a 2-CD soundtrack, hard cover art book, and a voucher to download items in Playstation Home.

Press Release after the break

TEKKEN: Blood Vengeance 3D brings together a wealth of prominent Japanese anime talent to create a TEKKEN experience like no other.  The film is directed by Youchi Mori with screenplay by Dai Sato, music composed by Hitoshi Sakimoto and CG animation production by Digital Frontier, and follows Ling Xiaoyu as she is hired by the G Corporation to come into contact with a high school student named Shin Kamiya.  Xiaoyu’s mission is complicated when a mysterious girl named Alisa Bosconovitch, an agent from a rival company, shows up to halt her progress. What seemed like a simple request spins out of control as Shin’s past is revealed to be connected to the violent history of the Mishima Zaibatsu.  TEKKEN: Blood Vengeance 3D is filled with high impact action that the TEKKEN series is universally known for, with gorgeously rendered and choreographed fighting scenes that will leave action movie fans breathless.  TEKKEN: Blood Vengeance 3D is presented in a high-definition widescreen format and compatible with 3D televisions.

TEKKEN Hybrid carries an ESRB rating of “T” for teen and has a MSRP of $39.99 for the standard version and $59.99 for the Limited Edition.  For more information on TEKKEN Hybrid, please visit www.namcobandaigames.com, www.facebook.com/TEKKEN or www.clubnamco.com.