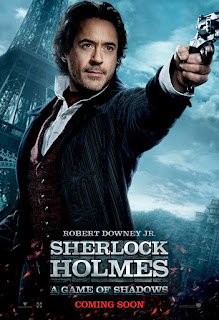 Greetings geeks! This is PhotonWaveZero of Geek Grotto bringing you my first contribution to the site, and what better way to make an entrance than to review 2011's most intellectually engaging action flick of the year? Here is my review of "Sherlock Holmes: Game of Shadows", the epic sequel to 2009's re-imagining of the world's greatest detective.

"Game of Shadows" takes place a few months after the first film, where we find a soon-to-be-wed Dr. John Watson (Jude Law), who has since moved out of the Holmes residence. After a rather odd yet ingeniously written introduction, we are reintroduced to the infamous Sherlock Holmes played by none other than the eccentric Robert Downey Jr.
I'd like to take a moment to boast about how much I enjoyed Downey's portrayal of the famous detective in both films respectively, but in this film especially. His brilliantly witty and believable representation of the character is just a comical joy to watch. From his mannerisms to his crescendo conclusions, Downey embodies what made the original Sherlock Holmes so popular and entertaining to begin with. He IS Holmes, and I would stretch as far to say that this is the best role of his career, rivaling his practically flawless portrayal of the famous Charlie Chaplin in the 1992 film, "Chaplin". A bold statement maybe, but in my eyes, a conspicuous truth.
Jude Law also plays a significant role acting as the condiments to Downey's cheeseburger with his respectable representation of Watson. While I believe most of the comical brilliance is a result of Downey's adlibbing genius, even his jokes would fall flat without the dry performance Law gives us throughout the film. The two feed off of each other remarkably well and create cinematic gold together. Their partnership is what makes the film so enjoyable to watch, and proves to be more effective in this film than it's predecessor. Thus, improving upon the original in a very vital way.
Another aspect of the film I'd like to address is the camera work and cinematography, which is quite possibly the best I've seen in film of this genre in years. Directer Guy Ritchie did an outstanding job engaging the audience and immersing them in the action. The attention to detail is meticulously impeccable, replicating the Victorian era exceptionally and accurately. Ritchie has done his homework, and accomplished a feat many directors just can't do with a film of this size and scale. He keeps the audience's mind thinking, focusing, laughing (often hysterically), crying, and most importantly, entertained.
While I could go on and on about this film's brilliance, I do have domestic obligations to return to. One thing I'd like to mention before I'm finished is that this film is definitely for those looking for an intellectually engaging experience. This is NOT "ROCK'EM SOCK'EM ROBOTS: THE MOVIE", this is "DON'T LOOK AWAY OR YOU'LL MISS SOMETHING MOVIE".
In conclusion, "Sherlock Holmes: Game of Shadows" not only improves upon the original, it honestly puts it to shame. It is witty, funny, smart, and adventurous. It's a film that has earned it's place on our home theater shelves long before its retail release. It has earned a solid 5 out of 5 Geegamons in my book.