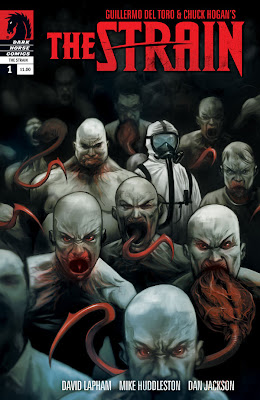 Greetings Geeks! A few weeks ago, Dark Horse sent me a copy of the Strain to review. Due to a myriad of other commitments, I've just gotten around to reading it.

Guillermo del Toro is attached to the project so you can be certain that it's going to be a mind-(expletive deleted) of a book.

This review should be relatively spoiler free but tread lightly as I'm not too sure what you all consider spoilers. Keep reading after the jump... 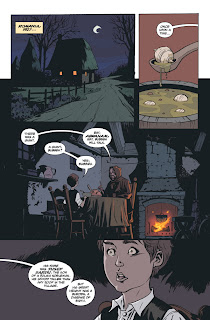 The book opens with an old woman telling her grandson a fairy tale. Not the pixies and rainbow kind, the creepy "don't go out at night" kind.

What follows is a mystery of creepy proportions. Let me be clear, it's very creepy...like, Guillermo del Toro creepy. Which is great!

The Strain doesn't spend long in the past. Once the creepy mythos is established, we zip to the present where a CDC worker and his son are having a night of gaming. The evening gets interrupted by a strange emergency assignment at JFK Airport. This is where it gets, for lack a better word, creepy.


The book's art is done by Mike Huddleston. An artist who I've honestly never heard of before. Nevertheless he does a great job of keeping the panels interesting and engaging. The only drawback I've seen is that as of yet, none of the characters are particularly recognizable. That could go two ways. Either everyone in the first issue is doomed to suffer a horrible death and is thus unimportant enough to develop visually as a character or they want you to think that way and the characters are all "everyday people" types who could be expendable at any moment. Either way, it works for me. I spent some time checking into Mike's work and he's quite good at making interesting and recognizable characters, so I'm torn. 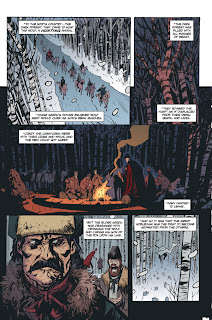 The book is written by David Lapham, Guillero del Toro, and Chuck Hogan. Despite having three writers, the book feels like a del Toro book. The pacing, the mystery, the creepy. It's all here. You want to know what's coming and you know it isn't good. Is it a Vampire? Is it a Demon? You'll just have to wait and see.

I'm not head over heels for the book yet. Perhaps after another issue or two. For a first issue, it feels more like a tease or an issue 0, but it's still creepy enough to wet your appetite for things to come. The book comes out on Dec. 14th so you'll want to rush out and get a copy.

Pre-Order The Strain at Dark Horse.


I'm split right down the middle on this one. It could hook me or lose me in the next 2 issues.
3 out of 5 Geegamons