Doctor Who coming to the PS3 & Vita! 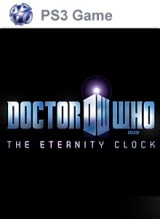 Greetings geeks! My apologies for not posting in awhile, but this piece of news warranted a geekalicious post! As a fellow "Who" fan, I felt obligated to share this with our fellow geekish followers in hopes it would spark a new plethora of "Whobians".


Coming March 2012, the UK's most beloved television show will take to the consoles in full "whoing" form in Doctor Who: The Eternity Clock, which follows Matt Smith's eccentric incarnation of the Doctor through countless missions from the "telly" series. To avoid spoiling the experience for everyone, simply watch the video below and watch the chronological magic happen!