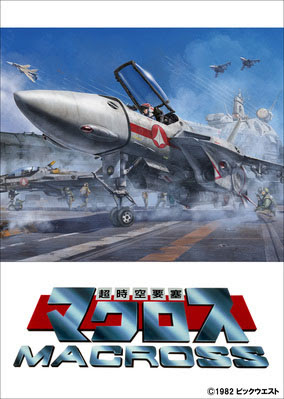 Greetings Geeks! So while Bandai USA seems to be on it's way to an untimely demise, Bandai Japan is apparently still pumping out releases. One of these is something very near and dear to this Geek's heart. Super Dimensional Fortress Macross!


Bandai Visual will reissue The Super Dimension Fortress Macross television anime series in an HD-remastered Blu-ray Disc Box on May 25 for 39,900 yen (about US$517). In addition, a "Complete Edition" will be offered as a limited-edition first pressing for 47,250 yen (US$612).
The regular edition will include all 36 episodes, a booklet (with staff interviews, pre-production designs from when the creators were working on early series concepts called "Genocidas" and "Megaload/Megaroad"), a box illustrated by character designer Haruhiko Mikimoto, and inner jacket covers illustrated by mechanical artist Hidetaka Tenjin.
The "Complete Edition" will add a bonus extras disc wih about 100 minutes of footage: a music video collection (edited frompachinko and pachi-slo machine footage), the 30th anniversary special that ran on the Family Gekijō channel, promotional videos from the Macross PlayStation 2 game, the "Macross Special" version of the first two episodes that aired in the original premiere, the original broadcast version of episode 11, the credit-less opening and ending animation sequences, the opening and ending sequences from "Macross Special," the super-deformed version of the opening sequence, commercials of the time, and other materials. Bundled with the "Complete Edition" are replicas of the 1983 tome Macross Perfect Memory, the scenario script for the first episode, storyboards (for the opening sequence, episode 1, and episode 27), and a collection of illustrations (from DVDs, LDs, plastic models packages, and elsewhere).
Source: AV Watch
Anime bluray macross