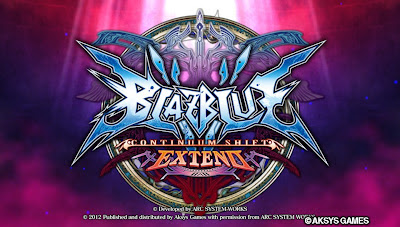 Today we have BlazBlue: Continuum Shift EXTEND for the Playstation Vita. The BlazBlue series from Arc System Works, the minds behind Guilty Gear, is a fantastic looking and great playing game. Just like its previous incarnation, this game looks as good as it plays, and then some. Published by Aksys Games in the US, this makes 1 of 2 fighters available for the Vita's US launch.


More after the Jump!
About the game
This is BlazBlue's 1st run on the PS Vita, but it's also available for the XBOX 360 and PS3.  The story, according to Wikipedia, goes something like this:


The game is set after the events of Blazblue: Calamity Trigger. A few days have passed since the reported raid by Ragna the Bloodedge, The 13th Hierarchical City "Kagutsuchi" forgets to celebrate New Years, as his alleged involvement in the "Mysterious Bombing" and "Huge Pentacle Sightings" becomes the talk of the town. With the Novus Orbis Librarium offering no official explanation, the citizens voice their own theories, exaggerating and spreading rumors like wildfire. Completely indifferent to the state of the city, Ragna grips his massive sword and quietly bides his time—waiting for the chance to achieve his true objective. And then, the enormous "power" that has ensnared Ragna begins to activate... 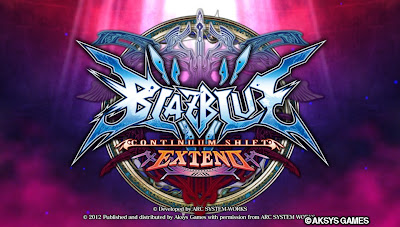 Graphics
Just like it did when it was 1st released, and when I played Guilty Gear 2 for the first time on my Dreamcast, BlazBlue looks AMAZING! Arc System Works, being one of the 1st devs to bring fighting games into the HD era, had an instant hit with BlazBlue: Calamity Trigger, and haven't let up since then.
Most backgrounds, if not all, are 3D rendered, but take nothing away from the looks of all the characters one bit. Animations are just as smooth as their console and arcade counterparts. 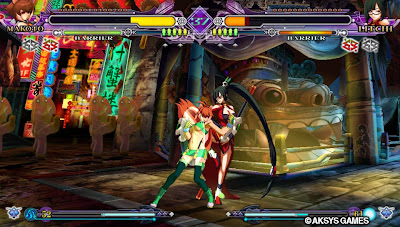 Music
Arc System Works has some love for the electric guitar and it shows. Since Guilty Gear, the series has always had a Japanese Metal sound to it. And you know what? It works! The music gets into the mindset that yes, this is the future, and yes, I will beat the living snot out of my opponent.
Gameplay
Simply put, if you played the arcade or console versions, then you will have no issues on the Vita. Controls feel just as tight as it's bigger siblings!

What else is there?

Besides the standard Arcade Mode, you also get a Story Mode and both AdHoc and Infrastruture Online Modes. The story mode has the standard "Story Select" from the previous games. but also, "Teach Me Litchi" which is strange to say the least.
Also, for the Anime Fans out there, the animeated sequences were done by Production I.G, and the quality shows! 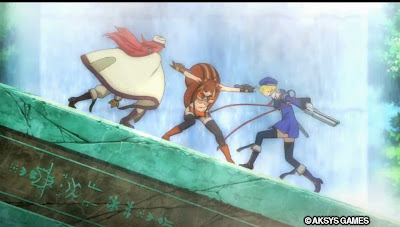 BlazBlue: Continuum Shift EXTEND is definitely worth your $40.

Now some screenshots for fun!