Review: The King of Fighters XIII

Well, Santa was good to me this past Christmas. Time, on the other hand, has not.
I'm about a month late on this review, since real life and work prevent me from playing as much as I want.

More after the Jump!


Anyways, here we have what has been 17 years in the making. The 13th entry in SNK's flagship series, The King of Fighters XIII. Since 1994, The King of Fighters has been a staple of 2D, team-based fighting. Bringing characters from Fatal Fury, Art of Fighting, and many other SNK games, the series has seen a rejuvenation of sorts in the west.

A genre that seemed as if it were dying, lately has seen a HUGE comeback from all the big players, including Street Fighter, Mortal Kombat, and The King of Fighters. Atlus has teamed up with SNK to bring us the awesome game! Since I am quite picky, I pay all my fighters using either my Sega Saturn USB pad or my custom Juri Madcatz Fightstick. Due to the fact that most of my friends only own a PS3, I own the PS3 version of the game, so that is the one being reviewed!.

Now, on to the review!

The previous entry in the KOF series gave us an HD overhaul, a major upgrade over the NEO-GEO MVS sprites that have been used before. KOF XIII gives us some more graphical enhancements as well as more characters, and they are stunning. The game looks and runs beautifully at 1080p! Online play has also been enhanced over KOF XII. 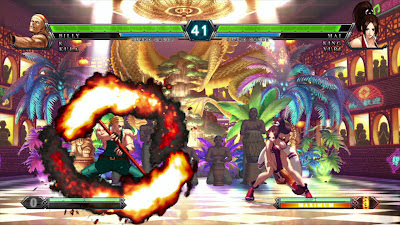 What else can i say besides gorgeous! SNK has definitely entered the HD market, and it easily rivals the likes of BlazBlue! The game runs at a solid framerate at 1080p! Backgrounds seem to be full of life, or cherub looking guys cheering you on the whole match! 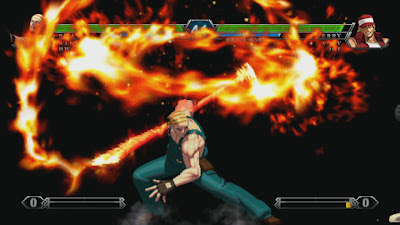 Neomax moves and victory poses are pretty much the only time the sprites don't look as good as they do zoom in and pixellate a small bit, but even then, they still look good and are well ahead of the old SNK sprites still!

Gameplay
I own KOF 94-98 on  the Neo-Geo MVS and always found myself playing better when I plug my Neo-Geo CD gamepad in as I never played well with the Joysticks I have installed (Seimitsu's). With this rendition, that is no longer the issue, as I can play with both my gamepad and joystick. Controls seemed have been beefed up a bit as everything is dead on perfect.

Also, SNK fighters have always been rather easy until you made it to the final boss. I remember Geese Howard, Krauser, and Rugal taking me FOREVER to beat, where as the rest of the game was no problem. Boss balancing seems to be much better as I made it through the game in roughly 20 minutes, including 4 retries on the final boss!

Also, available is a story mode, which is more of a digital comic that outlines ther game's story for you.

Online
I'm sorry, I kinda slacked on this piece. I normally only play against people I know as I cannot stand how some of the people online behave either after winning or loosing.

I can say though, the little I have played is MUCH smoother than last year's game.

Bonus Stuff
If you preordered the game, or can still find it, the 1st batch came with "The King of Sountracks", a 4 disc soundtrack with selections across the entire KOF series. This is well worth it if your a fan of SNK soundtracks! 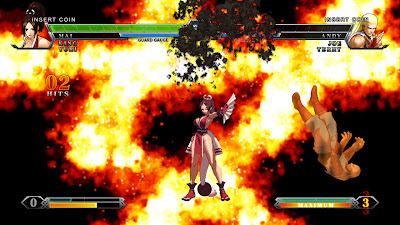 This game is not only a worthy successor to previous KOF games, but for me at least, it IS the best KOF game to date! I am glad that my wife thought this game was worth the purchase for me, as I am loving it! The only way this game could be any better is if the character roster gets a huge injection like some of the previous KOF games!