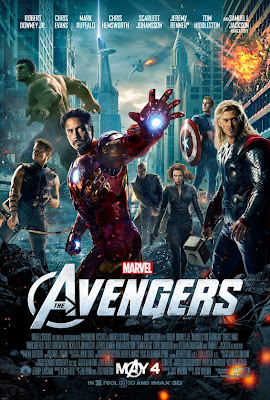 Marvel issued a Press Release outlining the details of the Avengers soundtrack. It will feature 14 tracks including one by Soundgarden! This is notable because nobody has heard from these guys in about 15 years.

Full PR including the 14 track listing and a sample of Soundgarden's new song after the jump.

Marvel Music/Hollywood Records announce the return of Soundgarden with the release of the band's first song in 15 years, "Live to Rise." The song will be featured in the end credits to this year's highly anticipated movie, "Marvel's The Avengers." "Live to Rise" is included on Avengers Assemble, a 14-track compilation of music from and inspired by the film. Avengers Assemble will be released on May 1, 2012.

Soundgarden stated, "We've been hard at work on our new album, which will come out this Fall. When the opportunity arose to write an original song for 'Marvel's The Avengers' film came our way, we thought it could be a cool match. We are excited to release our new song 'Live To Rise,' which is also the only new song in the film. Here's a taste. Loudest of Love."

Also, The Avengers original motion picture soundtrack, with score by Oscar®-nominated and GRAMMY-winning composer Alan Silvestri ("Captain America: The First Avenger," "Forrest Gump," the "Back to the Future" trilogy) will be available at online retailers on May 1, 2012.

With over 21 million records sold worldwide, Soundgarden redefined rock music for a whole generation and had a revolutionary impact on the course of musical history. At the dawn of 2010, the band, Chris Cornell, Matt Cameron, Kim Thayil and Ben Shepherd, announced a new beginning. In the last two years since Soundgarden has reunited, they have headlined festivals, toured the world and released their first retrospective titled Telephantasm which included the previously unreleased song, "Black Rain" and their first live album, Live on I-5. The press has exalted their return to the stage and the music scene. Rolling Stone called their headline performance at Lollapalooza "an epic set ... a blueprint of the Seattle sound," where the Chicago Tribune hailed them as "one of the last great hard-rock bands to emerge in the last 25 years." The band are currently in the studio in Seattle writing and recording their first LP in over 15 years, which is set for release in 2012.

In addition to Soundgarden's "Live to Rise," the Avengers Assemble collection features original songs inspired by the exciting and action-packed film event. The diverse range of artists includes Rise Against, Shinedown, Bush and Redlight King.

ADDITIONAL TRACK ON THE INTERNATIONAL RELEASE:

15. Pistols At Dawn Performed by Kasabian

Marvel Studios presents "Marvel's The Avengers"—the Super Hero team up of a lifetime, featuring iconic Marvel Super Heroes Iron Man, The Incredible Hulk, Thor, Captain America, Hawkeye and Black Widow. When an unexpected enemy emerges that threatens global safety and security, Nick Fury, Director of the international peacekeeping agency known as S.H.I.E.L.D., finds himself in need of a team to pull the world back from the brink of disaster. Spanning the globe, a daring recruitment effort begins.

Starring Robert Downey Jr., Chris Evans, Mark Ruffalo, Chris Hemsworth, Scarlett Johansson, Jeremy Renner and Tom Hiddleston, with Stellan Skarsgard and Samuel L. Jackson as Nick Fury, and directed by Joss Whedon, "Marvel's The Avengers" is based on the ever-popular Marvel comic book series "The Avengers," first published in 1963 and a comics institution ever since. "Marvel's The Avengers" is from Marvel Studios in association with Paramount Pictures, produced by Kevin Feige and directed by Joss Whedon from a story by Zak Penn and Joss Whedon with screenplay by Joss Whedon.

AVENGERS ASSEMBLE and Marvel's The Avengers original motion picture soundtrack will be available May 1, 2012 wherever music is sold.