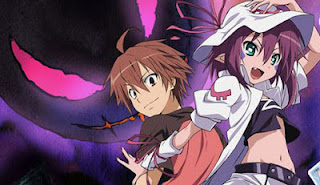 Sentai Filmworks has announced that Dream Eater Merry is available at your favorite Anime shop (if you're lucky) or online today! I have caught this series on "The Anime Network", and while different from my usual anime tastes, it's interesting.

Read The Press Release After The Jump!
From Section23 Films and Sentai Filmworks:

SYNOPSIS: Sometimes daydreaming can get you into trouble, but what do you do when it’s OTHER people’s dreams that you have to watch out for? For the last ten years Yumeji Fujiwara’s life has been getting progressively stranger, beginning with suddenly gaining the ability to predict what kind of dreams other people will have! Then his own dreams took a bizarre turn in which he was being pursued by armies of cats! Now, however, the weird-o-meter has just maxed out: Not only has Yumeji learned that the leader of the dream cats needs Yumeji’s body to access the Real World, but a beautiful girl suddenly drops on top of him and announces that she’s a Dream Demon who needs to return to HER world!