Read more after the Jump 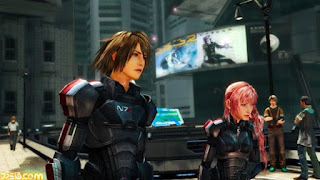 FINAL FANTASY XIII-2 COSTUME COLLABORATION WITH BIOWARE &
COLISEUM OPPONENTS DLC REVEALED
New Downloadable Content Features Exclusive Commander Shepard’s N7 Armor
Special Promotion Unveiled for Select Retailers
LOS ANGELES (Mar. 22, 2012) – Square Enix, Inc., the publisher of SQUARE ENIX® interactive entertainment products in the Americas, and BioWare today announced that Commander Shepard’s N7 armor design will be available as an optional costume for FINAL FANTASY® XIII-2. The N7 Armor will be available for the main characters, Serah Farron and Noel Kreiss.
Since the release of FINAL FANTASY in 1987, this unique RPG series continues to showcase the spectacular visuals, highly imaginative worlds and rich stories leading the industry and earning the highest accolades from users around the world. Titles of the series have so far achieved a cumulative shipment of over 100 million units worldwide (as of June 2011).