FOX Makes No Bones About An Eighth Season Renewal 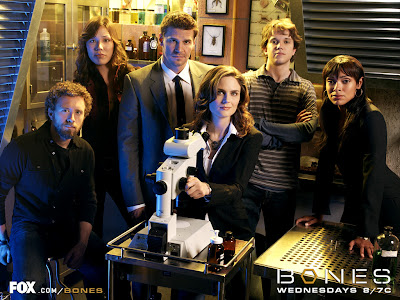 The last few years, the fate of whether Bones would get picked up for another season has been coming down to the wire. The last few renewals have come at or near the May deadline for network upfront presentations of their new fall lineups, but this year, fans of the saga of Bones, Booth, and the rest of the squints can breathe an early sigh of relief. EW.com reports that FOX has given the series an early pick up for an eighth round. This order will see the long-running procedural dramedy hit the 150 episode mark.

Read more after the jump.

Kevin Reilly, President of FOX Entertainment, had this to say regarding the announcement: "Over the past seven seasons, Hart Hanson, Stephen Nathan and the incredible Bones cast and crew have redefined the traditional crime procedural with an irreverent and adventurous sensibility and I’m really happy to have this distinctive, fan-favorite on our schedule for another season."It's not hard to see why FOX jumped on these Bones faster than usual this year. The network has had an unusually unsuccessful lineup of new series this season, with Terra Nova, I Hate My Teenage Daughter, and Allen Gregory already canceled, House ending, Alcatraz, Breaking In, Napoleon Dynamite, and Bones spinoff The Finder all pretty clearly headed to the graveyard, and Fringe hanging on for dear life. The way things are looking, FOX is going to have a dearth of established returning programs next season, it's not surprising that they would be in a hurry to lock in one of their few scripted dramas that actually gets good ratings.Are you pleased that Bones will return? Or should it have quit while it was ahead?
Source: http://www.tvrage.com/news/664/fox-makes-no-bones-about-an-eighth-season-renewal