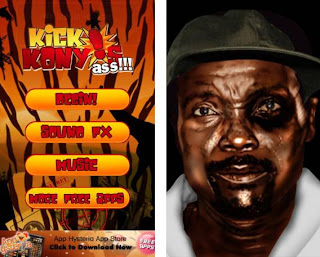 Read more after the jump.
Southern California, CA, March 22, 2012 – Iconosys, Inc., a leading mobile safety Smartphone application developer based in Orange County, CA, has released Kick Kony’s Ass Smartphone App. In view of the world’s attention recently focused on the tragic situation in Uganda, and in a supportive attempt to heighten public scrutiny regarding reports of genocide and massive loss of personal freedoms suffered by the people of Uganda and Congo at the hands of Joseph Kony, Iconosys has released a new game for those sympathetic to the cause of freedom to vent their frustrations.

While Iconosys does not endorse violence in any way, here are some important facts to consider as reported by the world press:

1)    Kony is a fugitive of the International Criminal Court, and is wanted by this court for war crimes and crimes against humanity;
2)    Kony has been a renegade insurgent to the Ugandan government for more than 2 decades;
3)    Kony and his fighters have killed, maimed and murdered the people of Uganda; and
4)    The US dispatched 100 US troops in October to aid in his capture.

Much attention to the plight of the Ugandan people has recently been generated through the Invisible Children’s “Kony 2012” Youtube video, which reportedly has received more than 137 Million Views, according to online measurement firm Visible Measures Corp.  The video goes on to outline the basis for crimes against humanity by Lord’s Resistance Army (LRA) and their leader Joseph Kony, who for the past 26 or so years has, among other things, kidnapped children into becoming soldiers for the LRA, to commit murder, sometimes forcing them to kill their own parents and forcing female children to becoming sex slaves.

In the game, you get to punch and generally beat down the Kony thug character – essentially giving him a taste of his own medicine. Simply tapping on the screen in different areas, determines whether you get to provide Kony with a Roundhouse, a 1-2, a left, a right, and finally, a big hand to the face.  The more you tap the screen, the more punishment you get to give Kony.  Finally, you can share your experience with the game on your facebook page, directly from the embedded game-over screen.

Of course, while we hope you will enjoy playing our game, we hope our efforts to bring more focus to the Kony situation will not be taken lightly. To repeat, we have the utmost sympathy and feel terribly for the plight of the people of Uganda as they suffer under the yoke of this man who is wanted by the International Criminal Court for crimes against humanity and mankind.

To conclude, we note a message from The Invisible Children’s website, where it says:
“Invisible Children Uses Film, Creativity And Social Action To End The Use Of Child Soldiers In Joseph Kony's Rebel War And Restore Lra-Affected Communities In Central Africa To Peace And Prosperity.”

A short demonstration video for the game can be seen at: http://www.youtube.com/kickkonysass

The app is optimized for Android OS Smartphones and Tablets and is available for download fromwww.kickkonysass.com, the AppHysteria™ AppStore, GetJar, Handango, and the Android Marketplace.  Soon available on iTunes.  Any net proceeds that may be recognized from this app will be donated to the World Children's Fund and/ or other charities helping the children of this region of the world.

About Iconosys, Inc.
Iconosys, a member of the National Organization for Youth Safety (NOYS) and is committed to health and safety through their other popular app releases; Digital Pillbox™, I Can Quit™, Word Bully™, Trick or Tracker®, and DriveReply® .  Iconosys is developing technologies and technology driven products for its clients with a goal toward designing apps that enrich, enhance, and ultimately make safer, our day-to-day lives.

Iconosys develops apps and technologies for iOS and Android OS Smartphones and tablet computers. See a cross section of some of Iconosys’ catalog of nearly 1000 Smart device apps at AppHysteria AppStore and at the company’s website, www.Iconosys.com.