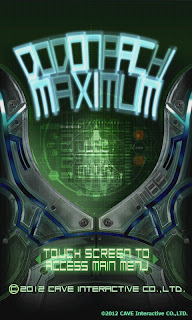 Up for the Micro-Review slate today: Dodonpachi Maximum! This is Cave's first original Smartphone game, and it's currently only on Windows Phone 7. Bullet Hell action in the palm of your hands and it's fun! 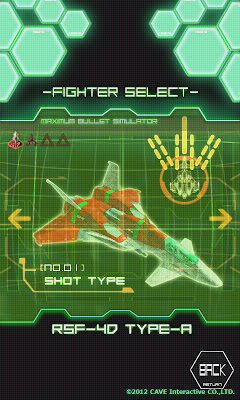 Considering my love of shmups (shoot em ups), this game was a no brainer. Considering Windows Phone 7 has a smaller game library than both Android Market (Play Market) and Apple's App Store, I was surprised that Cave would not only bring the Dodonpachi franchise to WP7, but an original entry at that!


Graphics:
This in an interesting topic for this game. The game takes place in the "Maximum Bullet Simulator", a simulator developed by EVAC Industries, the company responsible for the weaponry in the Dononpachi universe. Because you're in a simulator, the enemies are "virtual" and given an 8-bitish look and feel.
This style does not affect game play one bit, as withing moments, your screen is covered in colored death! I played this game on my HTC TITAN that has a 4.7" screen and the game is simply gorgeous! Colors are sharp, game is smooth as butter, and well, with hundreds of "bullets" on screen, the game never misses a step. 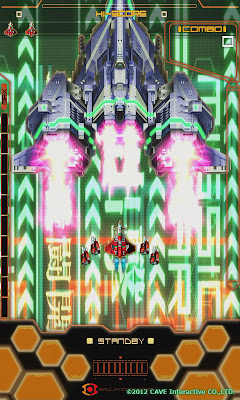 Gameplay:
One word: PERFECT. The game uses 1 finger to play, 2 to drop a laser bomb.It works so well that I may never want to play a shmup with a joystick again. 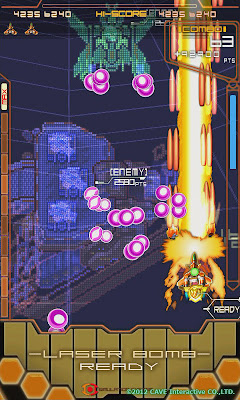 Sounds:
Coming with a remixed tracklist from WASi303, the soundtrack is just awesome on your phone.
Have a listen


Sound effects in game as just as good. Voices are clear, explosions are clean, and well the fireing of your weapon is great.
Misc:
Cave saw fit to give us Online leaderboards as well as XBOX Live support for Achievements.

Rating?
Lets see, did I mention my love of shmups? Check! My enjoyment playing the game? Check! Baddies getting laser Bombed? Check! Our Score? CHECK!