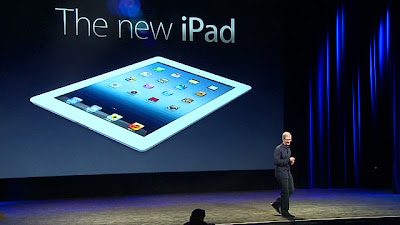 I had a busy day at the Digital Sign Expo in Las Vegas and didn't get a lot of time to bring you my usual run of news. So, however delayed, here it is. The NEW iPad!

More on this including my editorial thoughts after the jump.

The New iPad is also 4G ready, for those of you who actually GET 4G.

The RAM has yet to be announced, but I'm expecting 1GB. (Anything less would be uncivilized)

Editorial portion:
I am an Android lover. I converted from Apple Fan Boy to Google Fan Boy some time ago and never really looked back. That being said, this "New iPad" doesn't really change that for me. Yeah, it's got a sick, sick, sick screen resolution and quad core graphics..but that's where it ends for me.

For me, tablet computing is all about the experience and not the numbers. Besides those numbers, it's still the same old iOS with the same old crippling limitations. Limitations that Ice Cream Sandwich has beat them by a mile in.

Oh, but now it does voice commands...which...Android has done for years.

Sorry Apple. I'm a little underwhelmed. Seriously though, Great job on the screen. It really is amazing. You'll have them lining up outside your store again for sure.

What do you think about the New iPad? Leave your comments below. I'll be interested to hear what you think.
apple HD ipad tablet