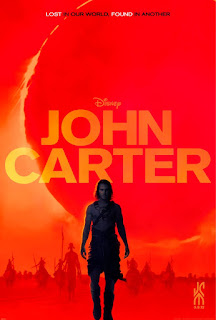 Greetings Geeks and Geekettes! This is PhotonWaveZero here with a quick and vague review of Disney's adaptation of Tarzan author Edgar Rice Burrough's interpretation of the infamous 'Red Planet', John Carter of Mars...

Read the full review after the jump!

*NOTE* This review is meant to encourage you to see the film, folks, and given its box office situation, it desperately needs your butts in the seats, so I am going to write this review VERY VAGUELY.

John Carter of Mars follows the story of.. uh... John Carter of "Earth" (Taylor Kitsch), a former civil war cavalryman with some serious butt-kicking abilities, a lack of respect for authority, and jumping abilities that would make Scandinavian Olympic high jumpers want to kick some Ewoks. After a very discombobulating opening involving some rather dimwitted Union infantry, their apparent lack of common sense, and a head-scratching worthy display of Carter's ability to jump through glass windows (very amusing, Kitsch), John is 'magically' (or scientifically) transported to the planet, Barsoom, aka Mars. Without giving too much away, John eventually runs into Stegosaurus...ehem... 'Dejah Thoris' (thank you IMDB), a ghastly named but aggressively sexy princess of Barsoom played by Lynn Collins. Upon his arrival, John becomes involved in a violent battle for supremacy as he risks body and thunder thighs to save his damsel in marital distress, with her kingdom and planet to boot.

Now that we got that brief synopsis out of the way, we can move on to what I actually thought of the film. You're probably all wondering: does the movie with the "Albino King Kong Twins" in the trailer really deliver? For the most part, yes, it really does. At it's best, John Carter of Mars is great popcorn fair (even though I didn't actually have popcorn), boasting a highly-imaginative premise, great cinematography, and incredibly cool production values. It does periodically suffer from some pacing issues, though. The viewer gets taken for a ride through the desert wilderness on the 'confusion steed' every so often, but seeing as how it was shot in Utah, it ironically makes a lot of sense. It's a minor flaw in an otherwise very satisfying experience. The comic relief and epic action sequences more than make up for its narrative shortcomings.

Another gripe I have with film is the annoying fact that I walked out of the theater with absolutely no recollection of any of the other main character's names except for the title protagonist--and, well, a very cleverly written cameo. I haven't seen such obscure names since looking at a map of towns in the moose-country Midwest. While this gripe is with author Edgar Rice Burroughs himself and not the screenplay writer, it was sometimes difficult to really relate to the characters and their situations, especially since I couldn't recall their names whatsoever.

Although a marketing failure with a disappointing opening of only $30.2 million dollars, John Carter of Mars is a highly enjoyable film that suffers from occasional slowdown and a sometimes confusing story. I will admit that I initially felt the first 20 minutes of the film were rather lethargic; however, I came to realize they were completely necessary to pave the way for the initially sad yet exceptionally satisfying conclusion. While a sequel is unlikely at this point given it's lackluster box office performance, I remain hopeful for a sudden spike of interest amongst the masses. John Carter of Mars as a standalone piece is arguably the best live-action addition to Disney's library since the original Pirates of the Caribbean. It has earned a well-deserved 4.5 Geegamons from my neck of the woods with its celestial imagination and scientific mysticism. So stop reading and go see this movie... NOW!