Review - Todd and the Book of Pure Evil 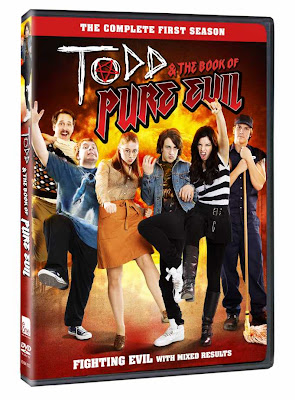 What do you get when you mix the idiotic stoner charm of Bill and Ted with the sardonic humor of the Crypt Keeper? You pretty much get Todd and the Book of Pure Evil.

Todd Smith is a wannabe rocker at Crowley High School. He and his trusty one-armed (literally) sidekick is Curtis fancy themselves to be Rock and Roll stars in the making. Much to their chagrin, the rest of Crowley High doesn't agree with them.

Get the full review after the jump
Crowley High School is home to all the classic social circles and memes. The Jocks, the Goths, the Nerds, etc. This of course results in the usual chaos that such an environment breeds...with one exception. Crowley High is also home to The Book of Pure Evil. A book with the power to grant you your deepest darkest desire...but at a cost. 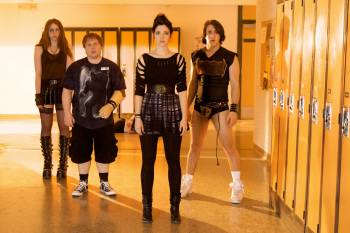 Todd finds himself in possession of said book and let’s just say that the results are...messy.

This leads Todd and Curtis to join forces with Todd’s crush Jessie and science geek Hannah to stop the Book’s awesome evil power.

This is one of those shows that surprised me. I didn't really know what to expect, but what I got was a hilarious ride through the twisted minds of show runners Craig David Wallace, Charles Picco, & Anthony Leo. Todd and the Book of Pure Evil is kind of like the bastard child of Goosebumps and Tales from the Crypt. It’s funny, gory, clever and even a little scary sometimes. 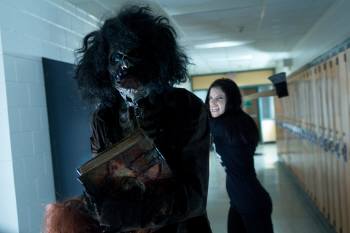 Every time someone finds the Book of Pure Evil and reads it’s desire fulfilling words, you just know the $#+ is about to hit the fan. The fat kid who wants to be thin. The gay kid who wants the bullying to stop. The kid who hates their parents. Just about every desire a high school kid could have is touched upon. These desires lead to generally horrific results. Let me be clear for just a moment. This show is gory. Not Piranha 3D gory, but you will be presented with scenes of dismemberment, beheading, and all kinds of violence.

Alex House is quite good as Todd Smith. His portrayal of the stoner lead character is interesting in that a handsome kid like Todd would, for all intents and purposes, be one of the last kids in school to be the recipient of hazing. But once you get past this and just immerse yourself in Todd’s world, it’s all forgiven.

Bill Turnbill is Todd’s BFF Curtis Weaver. A dorky kid with a prosthetic arm and the loyalty of a hound dog. Always ready to help his best buddy Todd through thick and thin.

Maggie Castle is Jenny Kolinsky. Todd’s main love interest who just happens to be dating the biggest @$ in school. (No surprise there) She clever, sassy and hell bent on finding out the truth of her fathers disappearance from 1 year prior. 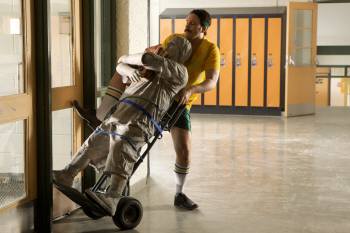 Chris Leavins is Atticus Murphy, Jr. A guidance counselor at Crowley High who has a few secrets of his own that lead to some of the shows best comedic moments.

The rest of the cast is also great including Melanie Leishman as Hannah. She’s got the hots for Todd who is of course oblivious to her existence.

Oh yeah, Jason Mewes is in this too. He plays Jimmy, the school’s custodian. Don’t let the marketing fool you, Jason is in just about every episode...but he isn't what I would consider a main character. He’s more of a weekly cameo.

Let’s talk about the DVD for a bit, shall we? The two disc set features the full first season in all it’s glory. No punches have been pulled. The transfer is clean, crisp and sounds great. I watched this on a 47” Vizio with an RCA sound system and it was a very enjoyable experience. The menu’s are simple and efficient.

There is a good amount of special feature content in the set. Some commentary for select episodes, The Original Todd and the Book of Pure Evil short film, Q&A with the cast, Promotional Clips, and my personal favorite, Blooper and Outtakes reels. It's always nice when a company like Entertainment One goes the extra mile. Even for lesser known shows like this little gem.

All in all, if you are looking for a good time, You will want to check out Todd and the Book of Pure Evil. It’s available now from Entertainment One for about $20. Which is a good deal for 13 episodes of Evil Fighting Goodness.

I’ll give Todd and the Book of Pure Evil a solid 3.5 Geegamons.