Starz issued a press release today regarding the addition of two new characters to Spartacus: Vengeance. 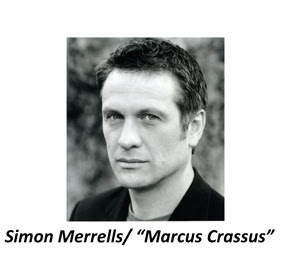 The first is Marcus Crassus. A rich and powerful Roman who will no doubt make Spartacus' life a living hell. He is to be played by Simon Merrells of BBC fame. 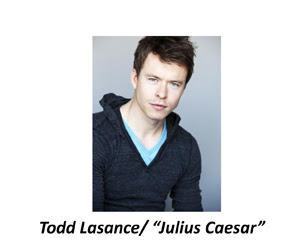 The second is none other than Julius Caesar! That's right, before he became the ruler of all he surveyed, Julius was just a cunning and skilled Roman from a powerful lineage. His appearance in Spartacus will be before his inevitable rise to power. Caesar will be played by Todd Lasance

Gaius Julius Caesar is a handsome young rogue from an esteemed lineage. His deadly intelligence and skill with a sword will be brought to bear against the rebellion. And Caesar will begin his ascent towards the all-powerful ruler he will one day become.

Marcus Licinius Crassus is the richest man in the Roman Republic. Envied and despised by the highborn among the senate, he craves the power and respect that defeating Spartacus and his rebel army would bring.

Lasance is known for his role as Ben McMahon in the Australian legal drama “Crownies" as well as the role of Quick Lamb in the critically acclaimed TV miniseries "Cloudstreet". He is last seen starring opposite Grant Bowler in the telemovie "The Great Mint Swindle".

Merrells played DO Griggs in the UK drama “London’s Burning,” had a recurring role in the BBC crime drama “Mersey Beat,” and was also seen on “Family Affair” and “Doctors.” He was last seen on the big screen alongside Benicio Del Toro, Emily Blunt and Anthony Hopkins in the Universal Pictures thriller, “The Wolfman.”

Both actors join Liam McIntyre (Ektopos, Radev, “Neighbours,” “The Pacific”) who stars as the title role of Spartacus.

“Spartacus” is executive produced by Rob Tapert (The Grudge, “Xena: Warrior Princess” and “Hercules: The Legendary Journeys”), Steven S. DeKnight (“Buffy the Vampire Slayer”), Sam Raimi (Spider-Man and The Evil Dead), and Joshua Donen (The Quick and the Dead). This same conceptual creative team also produced the first three installments of the series: season one, “Spartacus: Blood and Sand,” the prequel, “Spartacus: Gods of the Arena,” and season two, “Spartacus: Vengeance.”