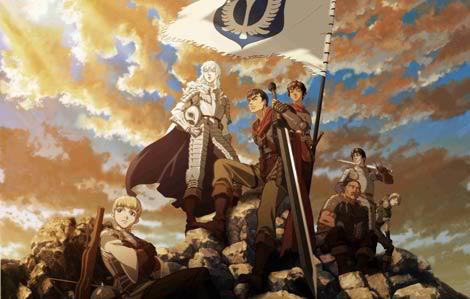 In my usual daily Anime news fix, I stumbled upon the exciting news that the Berserk Trilogy of films based on the Kentaro Miura manga will be getting a 16 country release.

Viz Media announced that they would be releasing the film in North America during their panel at Sakura-Con on Saturday.

Berserk has been licensed for release in North America, Canada, Russia, UK, France, Germany, Austria, Italy, Switzerland, Spain, Portugal, Belgium, Netherlands, Sweden, Australia, and South Korea. A release date for any of these regions has not been announced but the good folks Viz announced that their North American edition would be out this fall.

Berserk Ōgon Jidai-Hen I: Haō no Tamago opened in Japan on February 4. The film will be released on Blu-ray and DVD in Japan on May 23.

Berserk Ōgon Jidai-Hen II: Doldrey Kōryaku (Berserk Golden Age Arc II: The Battle for Doldrey) will be released in theaters in Japan on June 23. It focuses on the epic battle by the Kingdom of Midland to retake Doldrey Castle from the Chuder Empire.