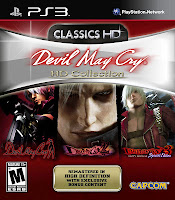 Capcom has announced that Devil May Cry HD Collection is available as of today, even though it was easily available every as early as last week. The game is available on both the XBOX 360 and PS3.

These are great games that a new generation of gamers can now enjoy without having a PS2!

Read The Press release After the Jump!
From Capcom:

Devil May Cry is one of Capcom’s most successful and critically acclaimed franchises, having sold more than 10 million units worldwide. Featuring Dante, one of the most iconic video game characters of the last decade, Devil May Cry HD Collection is full of the award-winning gameplay and style that the series has become known for, with the addition of stunning HD graphics, support for Trophies and Achievements and a bonus content vault that provides the player with exclusive artwork.

Debuting in 2001, Devil May Cry immediately redefined the action genre, achieving a metacritic of 94 . The title captured gamers’ hearts through its stylish, over-the-top action and bad boy anti-hero Dante. Son to a human mother and a devil father named Sparda, the half-demon Dante uses his innate abilities and the powers of ancient demons to fight a one-man war against the forces of darkness and save humanity from damnation.

The follow up to Devil May Cry, Devil May Cry 2 centers on Dante and his new devilishly agile partner Lucia in their fight to defeat a horde of evil led by a man hell-bent on achieving supreme power. Devil May Cry 2 released in 2003 and was praised for its variety of environments, Lucia as an additional playable character and updated control scheme.

The collection is rated “M for Mature” by the ESRB and carries an MSRP of $39.99.