Google+ gets a major update 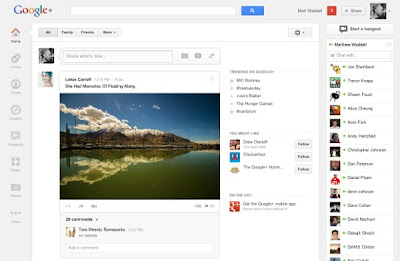 
It's no secret that I am a huge supporter of Google+. It's where the Grotto posts most of it's content. Facebook is nice, but where Facebook is like a family bar-b-que, Google+ is like a local coffee house. The people you meet on Google+ most likely aren't your family members. Oh they come to the coffee house as well, but you often find yourself talking to people who you ordinarily would never have met before. That's what I like about it. But I digress....

Engadget reported today that Google updated its flagship social product. As with most Mountain View projects, the new Google+ will rollout gradually. The UI has been given a major overhaul with a customizable shortcuts on the left and your buddy list moved to the right. The Hangouts feature will be getting their own dedicated home page too, allowing you to quickly peruse any Hangouts that are available to you. Even profiles are getting a dramatic facelift with larger photos and Sparks have officially been retired in favor of an Explore tab. Perhaps most welcome though is the enhanced multimedia sharing. To see all the fancy new features in action check out the videos after the jump.