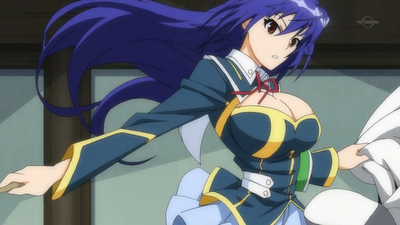 Sentai Filmworks has just announced the licensing of Medaka Box for the US from Gainax. It should be available through digital outlets soon and in stores after that.

Read the PR After The Break!
From Sentai Filmworks:

HOUSTON, April 16, 2012 — Sentai Filmworks is pleased to announce its acquitsition of MEDAKA BOX, the newest production of the famed Gainax studio (Neon Genesis Evangelion, Gurren Laggan). Featuring series composition and direction by (Shouji Saeki (He Is My Master, This Ugly Yet Beautiful World) and music by Tatsuya Katou (Samurai Girls, Horizon in the Middle of Nowhere), MEDAKA BOX is sure to prove that good intentions don’t always matter.

When newly elected Student Council President Medaka Kurokami institutes her idea for a suggestion box where people can submit problems that need to be solved, she’s expecting things like rescuing lost puppies and giving advice. What she and her best friend Zenkichi find instead, however, are the first hints of an unbelievable secret, and their school, Hakoniwa Academy, and Medaka herself are somehow at the very center of the growing maelstrom! As what seemed like an innocent past time turns into a dangerous game, Medaka and her recruits to the Student Council discover new depths to both themselves and their own unexpected abilities. And then things get REALLY out of control! Get ready for a battle royal unlike anything you’ve ever seen before as the simple power of suggestion unlocks the secrets of MEDAKA BOX!

About Sentai Filmworks:
Sentai Filmworks is one of the fastest-growing anime companies in North America, producing hit series like High School of the Dead, Towanoquon, Samurai Girls, Guin Saga, Needless and Angel Beats as well as high profile theatrical films such as Grave of the Fireflies and Appleseed. Sentai Filmworks’ programs can be found on home video distributed by Ingram Entertainment, Baker & Taylor, Section23Films, The Right Stuf and other good and fine distributors. Digital product offerings may be found at iTunes, Hulu, Netflix, Amazon, Zune Marketplace, Anime Network, Playstation Network, Android Market and YouTube.
www.sentai-filmworks.com