Black Veil Brides have surprised me on how relative they are in the geeky soundtrack industry. I wouldn’t expect a Heavy Metal, Screamo band from Hollywood, California to be in the Avenger’s soundtrack. 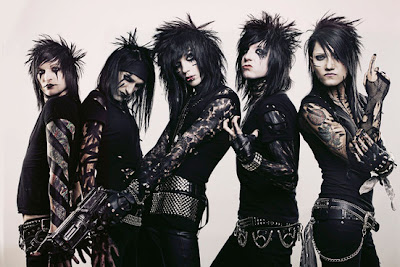 The band was founded in 2006 and currently includes singer, Andy (Six) Biersack, bass and backing vocals, Ashley Purdy, lead guitarist, Jake Pitts, rhythm guitarist and violinist, Jinxx and drummer Christian (CC) Coma. I’m not sure how much longer this will be the line up as they go through a lot of members. They are known for their distinct appearance inspired by Kiss and Mötley Crüe.
Andy Biersack named the band Black Veil Brides because it’s a Roman Catholic term used for when a woman marries into the church and gives up all the pleasures of life to devote her life to God. She is then deemed a Black Veil Bride. Although Andy is not religious he says he respects religion and what it stands for.
The band has only had four singles so far: “Knives and Pens”, “Perfect Weapon”, “Fallen Angels” and “The Legacy”.
They had a song on the Transformers: Dark of the Moon soundtrack called “Set the World on Fire” named after their second album. The song was originally supposed to be in Scream 4 but was not used. The band has released a new song “Unbroken” for the Avengers soundtrack. They also had a song on NCIS: Los Angeles.
The band has had two albums and is currently in the studio working on their third. 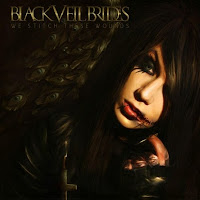 Their first album is called We Stitch These Wounds; I have a love/hate relationship with it. I have to be in the mood to listen to a lot of the songs, there are only a few songs I can listen to all the time. I know this might just be me but when listening to this album it felt as if they were trying too hard to be heavy metal. The guitar riffs all sounded the same and there was just too much screaming when there was no need. I know a lot of BVB fans will be angry at me for saying that but after listening to this album I was turned off of BVB.
After listening to the album again and learning about the band’s history, I think I understand more about why I didn’t like it that much. This was the band’s first studio album, they had released an EP with other band members which put them on the map with their infamous single “Knives and Pens” which they re-released on We Stitch These Wounds. After certain members left the band is when BVB started really developing their distinct appearance and in my opinion started trying to figure their band sound. I believe this is when they recorded this album where they were still in their Alternative stage trying to move into their Heavy Metal stage. So they combined both genres, which in my opinion didn’t sound good but this is the album where they gained a large amount of fans calling themselves the BVB army, so it might just be me. 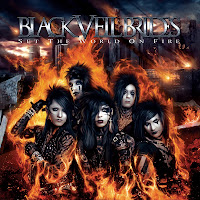 Now I’m not one of those fans that will give up on a band just because I didn’t like one album so I listened to their second, Set the World on Fire. I like this album. Thirteen seconds into the first song and I get an old school Rock feel. There are only about two songs that involve screaming and even then it’s very little. I also love how the band incorporates a violin into their music, which is really shown in "Saviour". If you are into Motley Crüe or Def Leppard you should definitely check Set the World on Fire out.

You might recognize Andy Biersack from the small amount of TV time he’s had on The Voice since his girlfriend, Juliet Simms, is currently competing.
This band, for me, is one that if a friend mentioned I would agree I liked but I wouldn’t go into detail about. I like them but I’m not crazy about them.

If you want a few songs to test the band try:
Knives and Pens
Fallen Angels
God Bless You