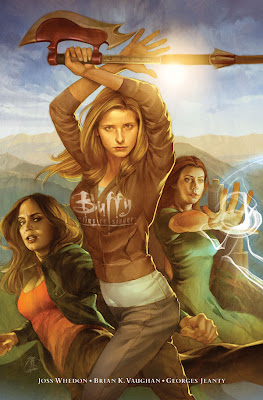 Buffy the Vampire Slayer was a HUGE phenomenon in the '90s. It spawned a spin off series (Angel) and saw it's way to 7 successful seasons. Unfortunately, the fans and creator Joss Whedon wanted more.

So it was several years later that Joss finally got his chance to create Buffy the Vampire Slayer: Season 8...as a comic book. Dark Horse comics has now collected the first two arcs of Season 8, plus two one-shots into a gorgeous hard cover book.

Hit the jump for my full review. 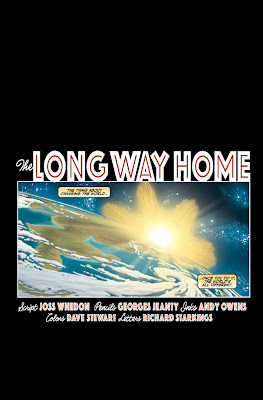 The idea of Buffy is a simple one. A High School Cheerleader type is also a predestined champion for good who slays evil in all forms. It started as Vampires...but Buffy quickly found herself slaying anything and everything that wanted to ruin her hometown of Sunnydale. 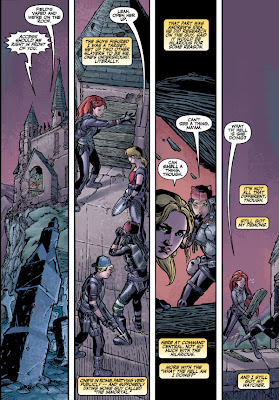 This book is THE choice for newcomers to the Buffyverse (after the first 7 DVD collections of course). No longer will you have to run around desperately trying to collect the individual issues needed to get your season 8 fix. Dark Horse has gathered these first two story arcs and put them in a beautiful hard cover book. This is particularly relevant for me since I was one of those people attempting to collect the issues as they came out. It proved near impossible as they kept flying off the shelves of my local comic shop and I never really got past the 5th issue. Dark Horse's hard cover solved that problem for me.

I did run into one other small problem. I couldn't put this book down! It's 304 pages of epicness. Most of it penned by the master, Joss Whedon himself. 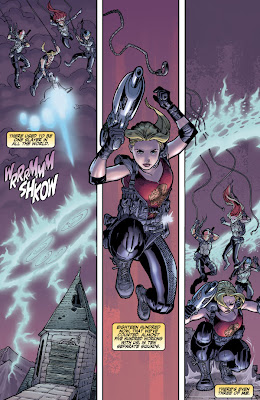 The story picks up a short while after Buffy: Season 7 ends. You remember? When Sunnydale was basically leveled due to the Hellmouth opening up completely and letting the armies of Hell out onto Earth? I'm sure you remember. Well, after the destruction of the Hellmouth, the Slayers-—newly legion--have gotten organized, but it’s not long before new and old enemies begin popping up. Buffy, Xander, Willow, and a very different Dawn are introduced to the season’s big bad, Twilight, and are only beginning to understand the incredible reach of this mysterious threat. Meanwhile, rebel Slayer Faith teams up with Giles to handle a menace on the other side of the Atlantic. It’s a dirty job, and Faith is just the girl to do it!

You will find that the series favorites have all gone through a bit of an evolution since we last saw them. Some things will have you saying "WTF?" But discovering each characters individual journey is all part of the fun. I personally enjoyed Faith's presence in the story. She always brings an edge to Buffy that is sometimes missing from the titular heroine. 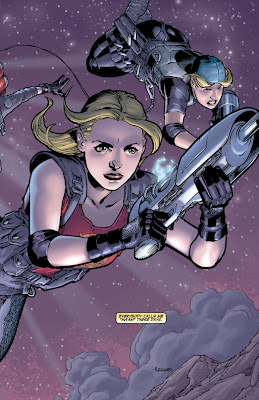 The artwork is brilliant as the artists actually managed to capture the likenesses and nuances of the original actors. At no point did I ever feel removed from the Buffyverse. It's a rare artist who can capture these types of moments and I must say they did Buffy proud. Especially Jo Chen who did a spectacular job with the cover art!