No, not the street fighter move. Hadouken! the band!
Hadouken! is an Electronic, New Rave, Dance Punk band from London, England. 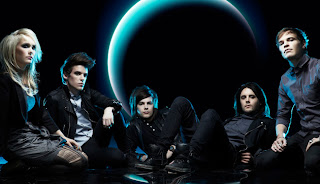 They formed in October of 2006, they include singer James Smith, synth (keyboard) player Alice Spooner, guitarist Chris Purcell and drummer Nick Rice.
It goes without saying that they got their name from the famous street fighter move.
They have released numerous singles including their first hit: "That Boy That Girl", "Liquid Lives", "Turn The Lights Out", "Mic Check" and their well known single "M.A.D." which you might have heard from the movie Piranha 3D or the game The Sims 3.
They also have songs on MMA: EA Sports, Need for Speed Hot Pursuit 2011 and Diary of a Wimpy Kid: Dog Days. 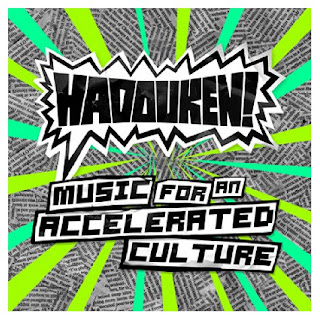 In my opinion their first album (Music For An Accelerated Culture.) is good with James Smith’s fast singing and their video game themed electronic sound but I much prefer their second album. (For The Masses.) 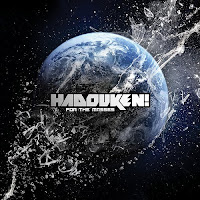 For The Masses is more polished with their electronic sound. It doesn’t sound as rough as the first album. Regardless I have both albums on my iPod and I can’t wait to own the third.
They have a free download of their new song from the upcoming album Parasite on their website, click here for the free song.
This band has been on my radar for a while now and I have loved them. Their music is great for parties or just to turn up loud while cleaning (as I do.)

If you want a few songs to test the band try:
M.A.D.
Mic Check
Liquid Lives