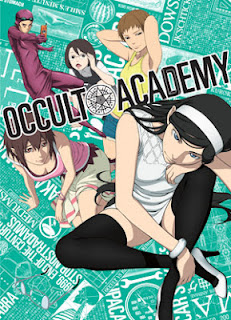 NIS America has just announced that Occult Academy is now shipping in a Premium Edition! At an MSRP of $64.99, you'll get the complete series and Blu-Ray and an art book. Good stuff!

Read the PR after the jump!
From NIS America:


About Occult Academy :
In the year 2012, the world is a wasteland invaded by aliens. Time travelers like Fumiaki
Uchida are sent back to the year 1999 in order to destroy the “Nostradamus Key” to prevent
the apocalypse. In 1999, Maya Kumashiro, the daughter of the former principal of Waldstein
Academy (AKA Occult Academy), returns to the academy to replace her father. Despising her
father’s obsession with the occult, Maya is hell-bent on running the school into the ground
out of spite. Her plan is interrupted when she meets Fumiaki and learns of the forthcoming
destruction of the world. They form a pact to look for the key.

About the bonuses—art book and bonus tracks:
- 36-page art book with exclusive artwork, draft designs, and an occult encyclopedia! The art book is uniquely laid out and filled with handwritten liner notes. With this art book you’ll be able to dive even deeper into the world and lore of Occult Academy!
- Four bonus short episodes that give a glimpse into Maya’s first childhood encounter with a real, live cryptid!
- Clean OP/ED, clean ep. 13 ED, and Love Machine clip