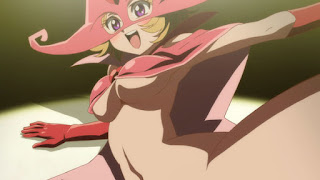 Read the PR after the jump!
From NIS America:

Ghastly Prince Enma Burning Up Complete Series Premium Edition
About Ghastly Prince Enma Burning Up:
Meet the Demon Patrol: a hotheaded demon prince; a sultry, half-naked ice princess; a lusty frog-demon spy; a talking wizard hat... Plus a little girl shows up. This rag-tag group has been charged with the protection of Earth from a multitude of demons who would love nothing more than to bring their world crashing down around them. They'll face off against a vengeful squid, a somnambulant kittycat, a pot full of snakes, a night-stalking deciduous, a hater of crotches, and even a literal butthead! Descend into an unreality filled with pratfalls, lewd behavior, and enough obscure cultural jetsam to drown us all!

About the extras—art book and bonus features:
- A hardcover art book (full color, 36 pages) that explores the show’s outrageous world and characters, with detailed bios, illustrations, concept art, roundtable discussions with cast and crew, and an all-new interview with the original author, Go Nagai himself! - Clean openings and endings for each episode (except episode 3 ending)

About NIS America
Santa Ana, CA (May 26, 2012) – NIS America is thrilled to announce the September release of Ghastly Prince Enma Burning Up Complete Series Premium Edition, the over-the-top, totally wacked out retro style demonic comedy. Ghastly Prince Enma Burning up Complete Series Premium Edition will deliver complete satisfaction with its collectible slipcase, extensive hardcover art book, and on-disc bonus features. Ghastly Prince Enma Burning Up will expose you to gallons of insane action and goofy gags, as well as lethal levels of pop culture references from days gone by. Go Nagai, the show’s original comic author, is famous for his unique characters and stories, and this newest iteration of his classic tale will knock your perception of Japanese anime on its butt! Prepare yourself for a wild ride this September, when this title will be available at select online retailers: Right Stuf, The Anime Corner Store, Anime Pavilion, Anime Castle, and NIS America Online Store.