Greetings geeks! Photon here with a brief review of the latest entry in the space police series, Men In Black III (or MIB3), and what a pleasant surprise it is.

After a 10-year absence from the the big screen, the men in strikingly expensive suits return to 'bust a cap' on more alien immigrants on the lovely planet Earth. Let me just say that I walked into the theater with average expectations, as I was rather disappointed with the franchise's previous entry, MIB2. This film, however, through clever writing and great cast chemistry, managed to bring the series back from becoming just another sequel cash in. Kudos to veteran director Barry Sonnenfeld for not delivering another MIB2 or dare I say Wild Wild West? **shivers** MIB3 isn't just okay; it's a pleasantly surprising summer popcorn flick.

Much like its predecessors, the film follows Agent J. (Will Smith) and Agent K. (Tommy Lee Jones) and their continuing adventures/misadventures as the Earth's only alien police force. While the franchise has had a 10-year hiatus from the silver screen, the characters' and their charm haven't aged a bit. They are reintroduced quite well and the chemistry between Smith and Jones is present and accounted for. I personally found Smith's performance as Agent J. to be the most enjoyable of the series. It seems he was given a lot of opportunity to ad-lib here, and most of it makes for quirky comic relief. Tommy Lee Jones still has it as Agent. K, but this time, however, they've thrown a new spin on the dynamic duo. 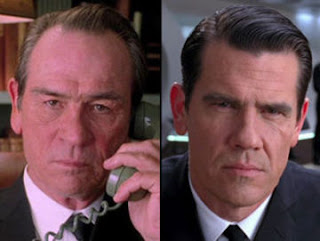 Jones' tenure as Agent K. is rather short-lived here, providing maybe 10-15 minutes of total screen this time around. Agent K is instead portrayed by Josh Brolin (No Country for Old Men), who steps into the role beautifully with an eerily good impersonation of the K we know and love, but with a less dry sense of humor. In fact, when the first trailers were released, I thought they had "de-aged" Jones like they did with Jeff Bridges in Tron: Legacy. Nope, that's Brolin alright, and I can honestly say with no offense to Jones here that his portrayal of K was just as enjoyable if not more so than Jones'. 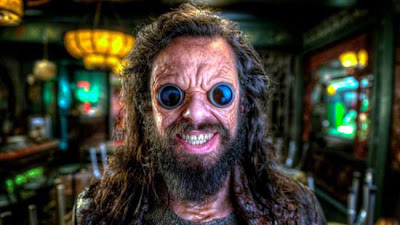 But what would a MIB movie be without a whacky new antagonist? Not a MIB movie, that's for sure, and this time, the villain is not a giant radiated cock roach, or a crazy hot shape-shifting extraterrestrial queen, but an extremely !@#$ed off alien biker on a Harley. You heard me right. Boris the Animal is a burly old alien whose "internal minion" resembles that of an "Alien" movie face hugger. Played by Jemaine Clement (The Flight of the Conchords), Boris has some serious anger issues and a seemingly insatiable grudge against Agent K, not to mention a nasty habit of talking to himself. You keep on riding that bike, Boris! Between all of the MIB villains, however, I honestly liked Boris the most, as he was actually quite sinister yet likable, not "kinda lame" and forgettable like the previous villains were.

While Men In Black III is definitely a fulfilling entry in the franchise, it isn't without its flaws. The movie does little to bring anything really NEW to the table, but if it ain't broke, don't fix it I suppose. It's certainly much better than MIB2, and that alone makes it worth a trip to the movies this summer. It's not as surprising or cool as the original, but provides enough summer action and humorous frills to keep you entertained from start to finish. When you're done seeing The Avengers for the 'upteenth' time, don't hesitate to check this movie out. You'll be glad that you did!