Review: Disgaea 3 Absence of Detention For The PS Vita! 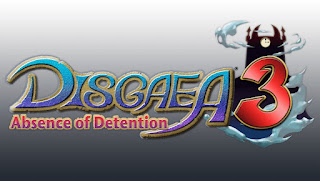 Up for review today is Disgaea 3 Absence of Detention for the Playstation Vita. For those of you who don't know, Disgaea is a Japanese Strategy RPG that takes place in a school located in the Nether World! As dark as that my sound, it is quite possibly the most colorful and hilarious interpretation of Hell I have ever seen.

Read our full review after the jump!

So, how quirky is Disgaea? Well the first screen give you a small hint...

The intro video, almost 100% identical to the PS3 version, sets the scene....via song and dance!

Ok,  yes, I found my self laughing and thinking WTF at the same time. Now my PS3 copy of the game never had a chance to touch my PS3 due to time constraints, so I jumped on the chance to play the Vita version since I can play during breaks at work. Now I am kicking myself for not realizing that I was sitting on pure gold for the past couple of years!

So, here we are, at The Nether Institute, Evil Academy, with the "Overload" as dean. you play as Mao, the dean's son and 1578 year old "honer student" at school. With his head in comics and dreams of defeating the Overlord, he realizes he must become a "hero" in order to defeat dear ol dad. The school delinquents are out to stop him as being a hero would make Mao a delinquent as well, and they do not want that!
As I mentioned before, the game is a turn-based strategy rpg. So to put it simply, plan your method of attack and then survive the enemy's onslaught. The training levels are more than adequate for you to figure out the game's system and to toy around a bit.
This game, as most NIS srpgs, will have you doing some crazy moves as well as dealing massive amounts of damage the further you go on. Add to that some funny story moments and you have a game any srpg or anime fan should enjoy!

So, now your probably wondering "is there any bad points to this game?" My answer is yes.... There just isn't enough time in my day to play this game! Seriously though, I haven't really found anything wrong myself except I'm probably the only one in the Grotto that likes this genre of gaming.

Thanks to NIS America for giving us an opportunity to try out this awesome game!l
Disgaea 3 NIS America PS Vita Vita