The Last Airbender comic is a hit! 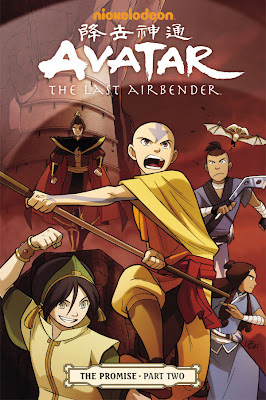 AVATAR: THE LAST AIRBENDER—THE PROMISE PART 2 HITS #1 ON THE CHARTS!

Greetings Geeks,
I have a confession. I know I'm going to lose some street cred (like I had any to begin with!) but I've never seen Avatar: The Last Airbender. I know of it. I know it's loved. I did see the movie though.
That being said, It looks like I'm going to have to start catching up because the comic book being published by Dark Horse is apparently hot, Hot, HOT! The Promise - part 2 was at the top of the BookScan charts AND the New York Times best seller list! That's pretty awesome! I've got a full PR after the jump for you.

Ever since the conclusion of Avatar: The Last Airbender, millions of fans have been hungry for more—and it’s finally here! The Promise rejoins Aang and friends for exciting new adventures, beginning with a face-off against the Fire Nation that threatens to throw the world into another war, testing all of Aang’s powers and ingenuity!

Avatar: The Last Airbender—The Promise Parts 1 and 2 are must-have additions for any Airbender fan! This is the latest release in an ongoing partnership between Nickelodeon and Dark Horse to bring you the very best in Airbender books.

Avatar: The Last Airbender—The Promise Parts 1 and 2 are on sale now!

About Dark Horse
Founded in1986 by Mike Richardson, Dark Horse Comics has proven to be a solid example of how integrity and innovation can help broaden a unique storytelling medium and establish a small, homegrown company as an industry giant. The company is known for the progressive and creator-friendly atmosphere it provides for writers and artists. In addition to publishing comics from top talent such as Frank Miller, Mike Mignola, Neil Gaiman, Brian Wood, Gerard Way, Felicia Day, and Guillermo del Toro, and comics legends such as Will Eisner, Neal Adams, and Jim Steranko, Dark Horse has developed its own successful properties, including The Mask, Ghost, Timecop, and SpyBoy. Its successful line of comics and products based on popular properties includes Star Wars,Mass Effect, Buffy the Vampire Slayer, Aliens, Conan, Emily the Strange, Tim Burton’s Tragic Toys for Girls and Boys, Serenity, and Domo. Today Dark Horse Comics is the largest independent comic book publisher in the US and is recognized as one of the world’s leading publishers of both creator-owned content and licensed comics material.

Nickelodeon is the number-one entertainment brand for kids. It has built a diverse, global business by putting kids first in everything it does. The company includes television programming and production in the United States and around the world, plus consumer products, online, recreation, books, and feature films. Nickelodeon’s U.S. television network is seen in more than 100 million households and has been the number-one-rated basic cable network for 16 consecutive years.
Airbender Avatar Dark Horse Nickelodeon