Ninja Turtles gets the axe....for now. 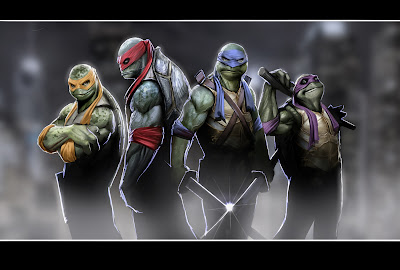 The Teenage Alien Ninja Turtles are getting put back on the shelf. Indefinitely.

Paramount has decided to shelve the Liebesman directed reboot for now. This time there is no sad, thinly veiled attempt at making excuses. No Post-3D conversion or anything like that.

The Hollywood Reporter reports that Paramount is shelving NINJA TURTLES in order to repair script problems. Now it has halted work on its planned holiday movie for 2013, temporarily laying off preproduction staff and informing those prepping the film that the work stoppage is "indefinite," according to sources.

While it's Paramount's name that is all over this article, it was Platinum Dunes (run by blockbuster director Michael Bay) who was producing the film. They made some headlines of their own when front-runner Michael Bay claimed during a press conference that the Turtles would now be Aliens.

Who knows. Maybe Paramount is finally catching on that people do in fact like substance mixed in with their style? We will just have to wait and see for now.