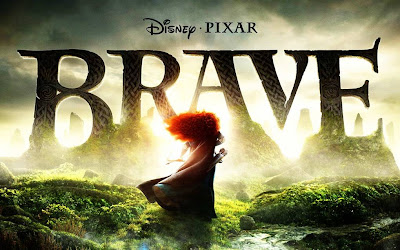 I had a chance to watch Pixar’s latest masterpiece “Brave.” While it is a beautiful work by the talented animation team, it isn’t without it’s flaws. Read my relatively spoiler free thoughts after the jump. 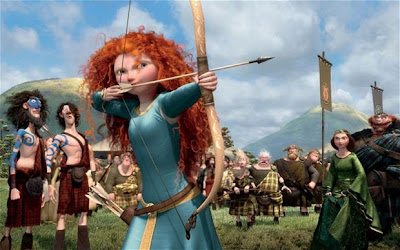 Pixar’s Brave is the story of Princess Merida. A young carefree Scottish lass who wants nothing more than to ride her horse through the woods while flinging arrows in the wind. Merida’s mother, the queen, has arranged for the 3 rivaling clans to bring their first born sons to compete for her daughter's hand in marriage. An idea that the young Merida is none too pleased about.
After embarrassing her family and the rival clans with her contemptuous display during the archery competition, emotions escalate between the mother and daughter and Merida storms off into the woods to have herself a little BF. Low and behold a small blue light appears. A wil-o-the-wisp. a magical creature who can lead you to your fate. Merida decides to follow the little blue beings deeper into the woods. 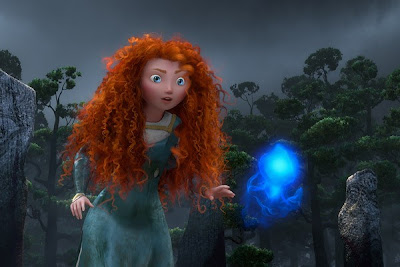 That’s as much of the story as I am willing to reveal so as not to ruin it for anyone. I will say this though; It is genuinely nice to see a story from the Disney camp that focuses on the relationship between Mother and Daughter instead of the typical Disney fare of a single (or widowed) Father struggling with a high spirited child. 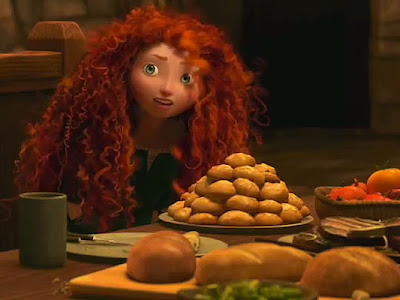 So what works? This movie is gorgeous! The technical prowess that had to go into making this film is nothing short of godly. Pixar has once again outdone itself in the animation department. Merida’s hair is like it’s own full fledged character. A raging ginger mane that speaks volumes to the child's rebellious intentions. The entire cast is so well designed and animated that it is easy to get lost in the beauty and spectacle of a film of this scale. Never before has Scotland been so beautifully rendered to the screen. 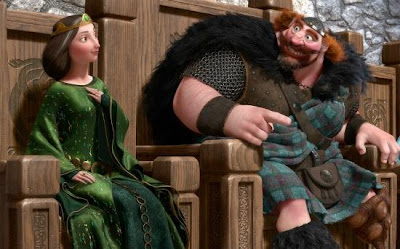 The vocal talent is fantastic! A strong, talented team of actors came together to create a fully fleshed out series of characters. Billy Connolly is excellent as the fun and rambunctious King Fergus. Emma Thompson is a delight as the Queen Elinor (and pulls off a mean Scottish accent while she’s at it.) Young Merida is played to perfection by Kelly MacDonald

The music, the art, the voice talent, everything about this film reeked of Scottish heritage. I loved every last drop of it.

Earlier in the review I said the film is not without it’s flaws. I mean that. While this is clearly Pixar doing what they do best, this is not Pixar’s best. 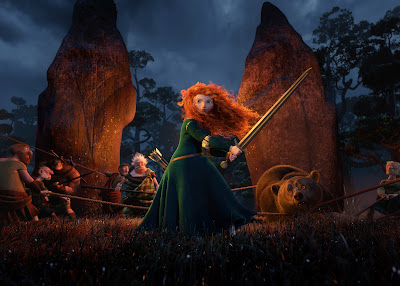 The problem I had with Brave wasn’t in it’s plot twist, which was the problem for some other reviewers. My problem was in it’s resolution. The story had the opportunity to have such rich character development that when the inevitable conclusion came, I was surprised at how easily and neatly things turned out. There really was no reason for it.

It’s hard to talk about without spoiling it, so I will stop there.

To wrap things up, I will say that while Brave is truly a triumph for the Pixar team, it fell a little flat in the story department. Never-the-less, Pixar has created a Scottish fairy tale that will stand the test of time.