It appears that the seal has been broken, signalling the Four Horsemen of the Apocalypse to ride and the beginning of Armageddon.... Except that it wasn't and War has doomed all of humanity. Death now rides to clear War's name and restore humanity in the sequel to 2010's Darksiders. How does this game stack up to the original?

Read the full review after the jump!
Let me start this of by saying I was a HUGE fan of the original. The art style, the story, and the game play made the original one of my favorites that year. With that said, I am enjoying Darksiders 2 thoroughly!

Story:
As summarized in my intro, Death is out to prove that War did not ride on his own, dooming humanity to extinction. For a reaper of souls, Death has a huge amount of loyalty for his brother and goes on a journey to attempt to restore humanity and prove War's innocence. This is easier said than done as the game is huge! On your quest you'll meet up with all sorts of characters. From ghosts, demons, the undead, Vulgrim,to Creators, Stone Golems, and more.

Game play:
You'll meet some familiar faces and new ones as you journey across Darksiders II landscapes. This game has been given a few more RPG like elements.Your character can still level up, but picking the right weapon can improve or hinder your character. What is nice is that YOU ARE DEATH, so any problem can easily be rectified with the right weapon and your selection is vast. From the base weapons you start with, you'll eventually toss them or FEED them to Possessed weapons which can level up as well. Beyond just your weapons, you can upgrade all of your armor, from your shoulder pad to your boots. You shouldn't concentrate on making Death look good though...as not all the "cool" looking stuff will help you much. 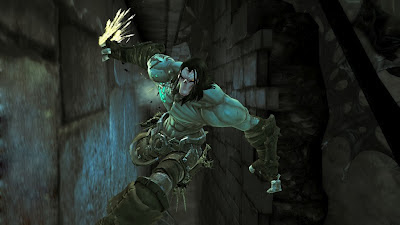 Just like what other reviewer have said, this game seems to have taken what was done right from games like God of War and Prince of Persia. Some environments are huge, but just like the original, you can still ride your mount, Despair, though these landscapes. Slicing and shooting all enemies you dare think they can just walk up to you. 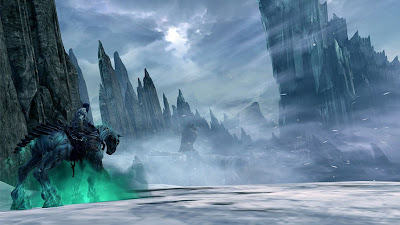 The puzzle elements seemed to have gotten a bit tougher from the original, which is a welcome addition. Even some of the bosses have some puzzle elements, so just running up and slicing doesn't always work. 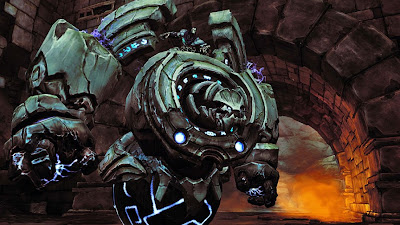 ﻿
Beyond all that, not everything is "go to point a, kill it, off to b, kill it, etc". Some characters will not give you the time of day, even after you prove yourself worthy. After everything you have done, you still have to run quests for them and then maybe they will talk to you! Obviously, some do not realize how important you are, or what your name implies, but it does add more to the game.

Audio:
It sounds great! From the sounds of Despair galloping down a field, to a scythe cutting into the flesh of some poor creature that thought it has a chance, everything sounds good. The music is no exception! It's all A+++ here!
Overall and Rating: 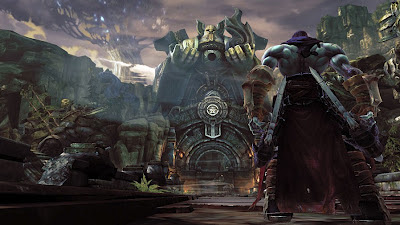 Darksiders had a lot going for it at the time. Zelda-like puzzles, huge environments, a variety of strange creatures, and the main character who walks around with a HUGE sword and gun! If you are a fan of the original, buy it now. If you like games with large environments that let you obliterate every living or non-living thing that comes at you, buy it now. If you fear Death and just looking at him sends shivers down your spine, then maybe your better off buying My Little Pony: Friendship is Magic Season 1 on DVD.

The game is not without it's flaws though. Dust, your crow, is supposed to "help" you figure out were to go next, but in some rooms it seems as if he just wanted to stay away from Death and would make sure to always move to the opposite side of the room. Stupid bird! Also, it's quite easy to loose track of what's going on when you're fighting in a tight space full of small and large enemies.
﻿
﻿
Darksiders 2 PlayStation 3 THQ Vigil Games