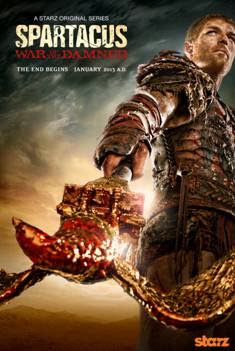 The generous folks over at STARZ have a treat for you today. A set tour from the latest and final season of Spartacus.

Hit the jump for more!

Before the epic saga of Spartacus comes to an end, get an insider’s view of how key locations became the incredible skylines, backgrounds, rooms and cities you will see throughout the upcoming season. Cynthia Addai-Robinson, Dan Feuerriegel, production designer Iain Aitken and executive visual effects supervisor Charlie McClellan also offer their thoughts and expert views.


“Spartacus: War of the Damned,” currently in production in New Zealand, takes place following the defeat of Roman commander Gaius Claudius Glaber. Spartacus and his men have amassed major victories against the Romans after the Battle of Vesuvius. These victories have not only forged the legend of Spartacus, but have greatly increased the ranks of the rebellion slaves to more than 30,000. Rome is indeed beginning to tremble at the threat Spartacus now represents.