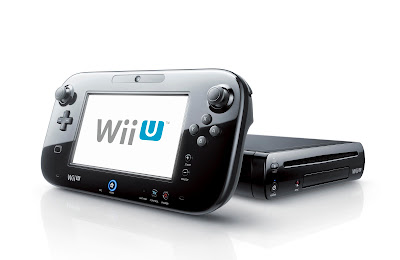 So, Nintendo has finally announce the launch date and prices (yes, prices) of the Wii U and other stuff.... so lets get down to it!

Read about it all after the jump!
Launch Date is November 18 in the US.

$299 you will get the system in white, Gamepad (the tablet controller), 8GB on board memory, AC adapter, controller, sensor bar, and an HDMI cable.

$349 will get you the above as well as:  The system in Black, 32GB on board memory (!!!!), Console Stand, Charging Cradle for the Gamepad, Nintendo Land, and membership into a club for Digital Download discounts until 2014.

Your Wii accesories will work here, so keep them charged!

Games will be $59.99, Bayonetta 2 is a Wii U exclusive, and no additional Gamepads for sale in the US yet!

Also, Nintendo will allow transferring goodies from the Wii to the Wii U, so DO NOT jump on GameStop's $50 trade in value towards the Wii U...

Update!
Here is more info since Nintendo was kind enough to give it to us!

Networking: Wii U can be connected to the Internet via a wireless (IEEE 802.11b/g/n) connection.
The console features four USB 2.0 connectors – two in the front and two in the rear –
that support Wii LAN Adapters for a wired Internet connection.

Wii Compatibility: Nearly all Wii software and accessories can be used with Wii U.
Energy Efficiency: Wii U utilizes specially designed power-saving features to lower its energy
consumption.