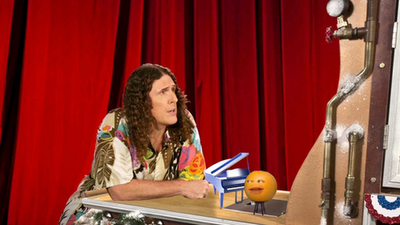 If you know me personally, you then know I personally can't stand most "children" programming on TV these days. Personally I LOATHE the annoying orange show, but this does tell me something. Obviously adults seem to what the show enough that Weird Al, Brent Michaels and Alice Cooper will be on November 26th's Holiday special. These guys were selling hits when I was just a kid, and I don't picture most kids knowing who any of these guys are...

Either way, this may be the ONLY episode of this show that I purposely watch..

More after the jump... 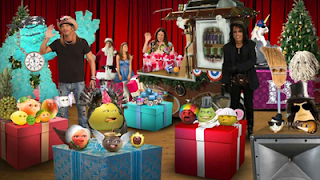 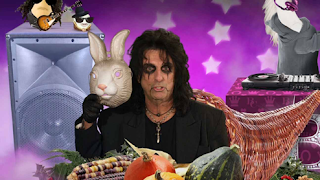 
Weird Al Yankovic, Maria Menounos, Bret Michaels, and Alice Cooper will be joining the cast of “Annoying Orange” in fun skits and strange takes on well-known holiday songs.  In fact Weird Al, Bret Michaels, and Alice Cooper sing a “Holiday Mash-Up” while Maria Menounos flirts with Orange, much to Passion Fruit’s dismay.
In case you are not familiar with Annoying Orange, the series was created by Dane Boedigheimer and took the Internet by storm when it debuted on YouTube in October 2009 and since then has quickly racked up more than one billion total views with over 2.4 million YouTube channel subscribers.  The popularity has also translated to more than 11 million likes on Facebook and to its official web site, www.annoyingorange.com, which generates nearly four million page views each month.  In June, Annoying Orange embarked on a new adventure with the debut of its animated television series which has become an instant hit in the U.S. continually ranking amongst the top shows for boys in the time period.  The series currently airs Monday at 8:30pm ET/7:30pm CT on Cartoon Network and is available for download through iTunes, Xbox, and PlayStation.