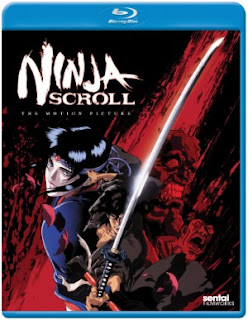 One of my favorite anime classics is now available on Blu-Ray, and DVD again. No idea what's going on with Manga, but I'm glad Section23 Films, via Sentai Filmworks, has licensed and released this classic from Mad House!

I still own the original Manga DVD release from LOOOONG ago, but would love to catch this in Blu!

Full PR after the jump!

HOUSTON, December 4th, 2012 – Section23 Films is pleased to announce today’s release of the classic anime masterpiece, NINJA SCROLL. The anime that set the standard will be available for the first time ever on Blu-Ray, featuring an all-new, high-definition transfer straight from the source! NINJA SCROLL is available on DVD & Blu-Ray by Section23 client, Sentai Filmworks.

SYNOPSIS: Swords shatter, blood sprays and demons suck the life out of dying men as the wildest samurai adventure ever made is unleashed to tear your senses asunder!  Jubei Kibagami has always been the master dealer of death, but in rescuing a ninja woman from a monster he sets loose a chain of events that puts death in his own veins and sends them on a nightmarish odyssey through a surreal and devil infested ancient Japan.  How do demonic possessions, an annihilated village and a man Jubei thought safely buried in his past all connect?  If Jubei can't piece the blood-soaked clues together, his only consolation will be that he won't live to regret it for very long!  Prepare your mind and steel your gut for the insanely gore-packed orgy of violence that still stands alone and unchallenged as the ultimate anime action feature: the epic milestone in animation that is the legendary NINJA SCROLL.

Buy it on Blu-Ray
Buy it on DVD