Aniplex to release Oreimo as a limited edition Blu-Ray! 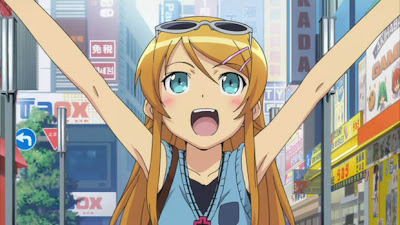 Yes, also known by its full name, Ore no imouto ga konnani kawaii wake ga nai, will get a US release date close to it's Japanese date. You get all 12 episodes + the OAVs on four Blu-Rays on February 27th for a staggering MSRP of $329.98! While that does seem astronomical for the US, that seems to be about average for Japan. Unfortunately, we are not in Japan, so only the most hardcore of anime fans and those with disposable income will be able to buy this title.

Read the full PR after the jump
From Aniplex:

Kirino, Kuroneko and the rest of the Oreimo cast are coming to
Blu-ray this February!


SANTA MONICA, CA (January 25, 2013) – Recently on their live panel on their Youtube channel,
Aniplex of America Inc. announced that the Oreimo Blu-ray Disc Set will be imported from Japan and released in North America on February 27th, 2013 and will be available through anime distributor RightStuf.com and official retailers (http://aniplexusa.com/retailers/). The wildly popular series originally sold out on its first Limited Edition DVD release. Oreimo is now coming back in a complete set on Blu-ray in a limited edition collector’s set. Fans in North America can take comfort knowing this Blu-ray box set will be released nearly the same time as Japan’s release date.

“Oreimo is still in high demand and we are confident this Blu-ray Box set will satisfy the fan’s requests for a Blu-ray set” says Hideki Goto, the president of Animation Business of Aniplex of America. This release is a US and Canada Exclusive and available while supplies last.

The Oreimo Blu-ray Disc Set can be pre-ordered and purchased at:
Right Stuf
Official Retailers