Pick your champions for Injustice : Gods Among Us, and win prizes too! 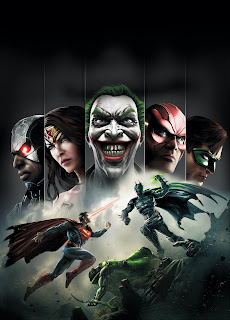 Today, Warner Bros. Interactive Entertainment and DC Entertainment announced the details -- and an invitation -- to the ultimate battle of superhero supremacy for the upcoming fighting game, Injustice: Gods Among Us.
Big ups to GodAshram for the heads up on this, now follow the break for more!

For the next 10 weeks, the roster of legendary DC Comics characters will enter the Injustice Battle Arena. Each week, a new pair of challengers will enter the arena, as fans are given the opportunity to vote on who they believe would come out as champion.

Every Monday, combatants will be revealed in weekly match-up videos. Detailing the skills, attributes and technology of the week’s competing DC Comics warriors, the videos also include man-on-the-street and celebrity experts explaining which character in the battle has earned their vote.

All votes and submissions must be submitted by Thursday night, and the results will be announced in a final fight video, showing the all-out battles and ultimate victor of that week's match-up.

The teaser video that explains the campaign can be watched by clicking on the following link here!

Fans can also view the first match-up video of the campaign right here!

By participating in these weekly show-downs, fans based in the United States can enter to win amazing prizes each week, simply by submitting their votes for each complete round of competition. Voice your opinion via Facebook, YouTube or Twitter and join the debate!

To vote on each week’s battle and be eligible to win prizes, visit https://injustice.dccomics.com/#
Injustice: Gods Among Us is an all-new game in development by award-winning NetherRealm Studios. The title debuts a bold new fighting game franchise that introduces a deep, original story featuring a large cast of favorite DC Comics icons such as Batman, Green Arrow, Cyborg, Harley Quinn, Nightwing, Solomon Grundy, Superman, The Flash, Wonder Woman, Green Lantern and many others. Set in a world where the lines between good and evil are blurred, players will experience heroes and villains engaging in epic battles on a massive scale.