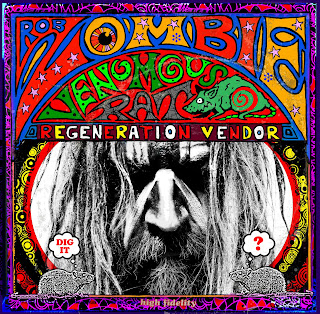 It's not often that I get to report on music, but a Press Release from Universal Music Group for Rob Zombie's next album just hit my inbox for "Venomous Rat Regeneration Vendor."  Quoted as being a mix of White Zombie and Rob Zombie, yes I know how that sounds, that quote is definitely true. Out April 23. 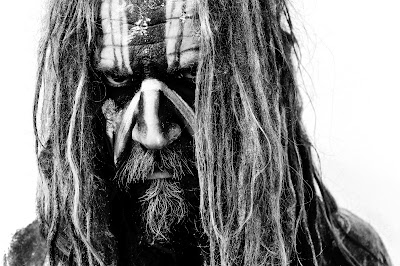 
ROB ZOMBIE’S NEW ALBUM ‘Venomous Rat Regeneration Vendor’
OUT APRIL 23 ON ZODIAC SWAN/T-BOY/UMe
“I think for the first time this new album perfectly merges the old days of White Zombie with the
future of what I am doing now . I think fans of both will agree that this is the perfect combo of the two  worlds " – Rob Zombie, 2013

LOS ANGELES, January 30, 2013 —   A rock icon and auteur filmmaker with insight and unlimited vision, Rob Zombie has continuously challenged audiences as he stretches the boundaries of music, film, and publishing. Now, the seven-time Grammy®-nominated recording artist releases his fifth solo album, Venomous Rat Regeneration Vendor, which streets April 23, and includes the first single, “Dead City Radio and the New Gods of Super Town,” along with such tracks as “Ging Gang Gong De Do Gong De Laga Raga,” “Lucifer Rising,” “Behold! The Pretty Filthy Creatures” and a heavy-duty cover of Grand Funk Railroad’s “We’re an American Band.”
Rob Zombie’s Venomous Rat Regeneration Vendor is the first release on his new label, Zodiac Swan, through T-Boy Records/UMe.
As a musician, Rob Zombie has sold over fifteen million albums worldwide to date. His last studio album was the long-awaited Hellbilly Deluxe 2. The album came a decade after its predecessor, Hellbilly Deluxe, the album that established Zombie as a solo artist after the breakup of multi-platinum group White Zombie. That triple-platinum album also yielded a string of successful radio singles, namely “Dragula” “Superbeast” and “Living Dead Girl,” which dominated the airwaves.
The rocker-turned-film director is the only artist to experience unprecedented success in both music and film as the writer/director of five feature films, with a worldwide gross totaling more than $100 million dollars. The week of his album release, Zombie will premiere his sixth motion picture, The Lords of Salem, that he wrote, directed and produced in tandem with the producers of the Paranormal Activity franchise, on April 26, with Anchor Bay Films.
Last year, in addition to working on his film, Zombie also dominated the touring world in 2012, blowing away audiences on the road with Megadeth, then with Marilyn Manson for the “Twins of Evil Tour.” Zombie and his band of maniacs – John 5/guitar, Piggy D/bass and drummer Ginger Fish – brought their elaborate, multi-media production, complete with hair-raising theatrics, animatronic robots, oversized LED screens, a non-stop collage of psychotronic monster film clips, a spectacular light show, a gigantic robot with flames shooting out of its body, pyrotechnics, insane guitar riffs and vicious beats to audiences and festivals around the world.