First New "Mars Attacks" Cards in Half a Century! 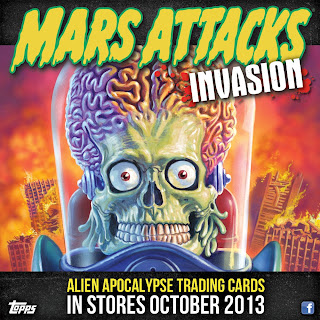 Like many others, the Tim Burton movie was my first look at these Martians. Well, Topps is bringing these perpetually smiling invaders back in an ALL NEW series of collector cards! Just waiting for them to appear on Amazon to place in my wish list!

Full PR after the break!

New York – (April 15) Riding the momentum of the 50th Anniversary of their best-selling franchise, Topps is proud to announce the first all-new MARS ATTACKS story-based trading cards in more than half a century!  While paying homage to the infamous card set that first shocked parents and delighted children in 1962, Mars Attacks: Invasion will be a bold revival, and will take the property into exciting new territory.

"Last year's Heritage re-issue was a smash hit with fans,” says Topps' Adam Levine, who has overseen the recent resurgence of MARS ATTACKS, “and this brand-new series is what we’ve been building to.  It will be a fresh re-imagining of the original series and will stay faithful to MARS ATTACKS' pulpy, classic sci-fi roots.  This means all-new, traditionally hand-painted cards illustrated by a group of artists carefully selected to carry forward creator Norm Saunders' legacy."

The set will boast an impressive roster of talent, from living legend Earl Norem and master illustrator Joe Jusko, to renowned painters Ed Repka, Glen Orbik, Gregory Staples and more to be announced.  Artists contributing to the 63-card story-based portion of the set will each illustrate multiple cards, with the set being divided into themed subsets that combine to tell the story of an alien apocalypse unlike any other.

"Topps hasn't done a set like this in more than twenty years,” says series editor David Waldeck. “It's a return to the days when trading cards hooked audiences with incredible imagery and imaginative storytelling. We've loaded the set with everything fans know and love about MARS ATTACKS: giant insects, flying saucers, ray guns, robots, damsels and death rays!"

Topps will also provide fans with the opportunity to find original 1962 MARS ATTACKS trading cards randomly inserted into packs!  These vintage trading cards from the most valuable non-sport trading card set in history have been certified by Topps in 2013 and will be available as rare chase cards in Mars Attacks: Invasion!

Additional chase subsets and valuable collector-driven inserts will be detailed in the coming months.   Filled with high levels of sci-fi action and excessive amounts of bone-chilling gore, this all-new series will surely thrill long-time fans and legions of new ones in equal measure.

Mars Attacks: Invasion is scheduled for release in October 2013.

For more information on MARS ATTACKS, follow on facebook: www.facebook.com/MarsAttacks, and read the continuing adventures of the new Mars Attacks published monthly by IDW.

About The Topps Company, Inc.
Founded in 1938, The Topps Company is the preeminent creator and brand marketer of trading cards, collectibles and distinctive confectionery. Topps’ leading sports and entertainment products include MLB, NFL, Star Wars, Garbage Pail Kids, BattleTech and Mars Attacks, among many others. For more information, visit www.topps.com.