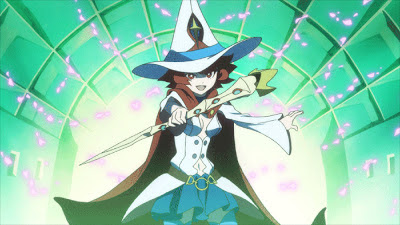 acttil, a new company dealing in just about anything and everything they like or enjoy, has announced they will assist TRIGGER with marketing Little Witch Academia Collectors Edition later this summer. Released on Youtube this past April by Trigger, this 26 minute show deals with a human child that is inspired by a "Cool Witch" named Shiny Chariot.

To be honest, I've never heard of this title until the release hit my inbox. But after watching a few minutes worth, I enjoy the art style and the softer colors used.

Read the full PR after the break... The details of a viewing contest during Anime Expo are listed there as well!!
From acttil:

LOS ANGELES, CA., June 19, 2013 -acttilis excited to announce, on behalf of the animation studio TRIGGER, their first anime title, Little Witch Academia.Originally available only in a digital format, it will be released now as a physical Collector’s Edition. This release will include 1Blu-ray disc, an original soundtrack disc, and a 112-page art book, which will be available for purchase this summer. The details of the original soundtrack disc, retail and online store information will follow.

Masahiko Otsuka, the script writer of Little Witch Academia, and the founding member of TRIGGER, will make an appearance and hold a panel at Anime Expo (July 4thto July 7th), Los Angeles, CA. Otsuka will also attend a Little Witch Academia Fan Event held at JW Marriott Los Angeles L.A. Live on July 6 from 2pm (PST). The fan event, including the screening of a never-before-seen Making-of video and a Q&A session with Otsuka, will be open to 50 lucky fans. The fans of Little Witch Academiacan submit their full name, address, and phone number to the given email address (contest@acttil.com) by June 26th. The randomly selected winners will be contacted by June 30th.

*Travel expenses will not be reimbursed. The applicant must be over 13 years of age. No purchase necessary.

Little Witch Academia was produced by TRIGGER as one of the four titles for Anime Mirai, the Young Animator Training Project, whose purpose is to inspire, train, and energize young animators in the Japanese anime industry. After showcasing the trailers and full episode of Little Witch Academiain the Spring of 2013, not only was it well-received in Japan, but it has also become a surprise hit with anime fans in the West.

The Collector’s Edition will come with 1 Blu-ray disc that includes the 26-minute episode of Little Witch Academia, a never-before-seen 66-minute making-of video, an original soundtrack disc, and a collectible 112-page art book. The inspirational making-of video follows the struggles and breakthroughs of the young animation team at TRIGGER, and the meticulous process they went through to create this anime. Not only will fans of Little Witch Academiaenjoy the making-of video, but anyone pursuing a career in the animation field will find something to take to heart.

Story
Akko Kagariis an ordinary girl who joins the renowned witch academy for witch girls, Luna Nova Academy. When she was younger, she went to Magical Festa, a magic show hosted by a witch named Shiny Chariot. Akko was so mesmerized and inspired by Shiny Chariot's performance that she dreamed to someday be a "cool" witch like her. This young and impressionable Akko takes Shiny Chariot's words as her own motto: "Never forget, a believing heart is your magic.“ As part of a class, Akko and her classmates go into a labyrinth under the Tower of Luna Nova. There, a sealed ancient dragon was unleashed by one of her classmates. Akko tries to stop the dragon, but…
For more information, visit www.acttil.com/littlewitchacademia!

Anime Production, Publisher
TRIGGER, Inc., is an animation studio founded by former GAINAX employees Masahiko Otsuka and Hiroyuki Imaishiin August of 2011. “If an anime title is like a bullet, we would like to be the trigger that helps propel that bullet forward,” said the founders of TRIGGER. They are best known for Inferno Cop, Little Witch Academia,and are now working on KILL la KILL, their first anime series for television.

Good Smile Company, Inc.is the global leader in Japanese hobby products and services, most famous for their unbeatable, high-quality character figurines and their involvement in a wide variety of products, including animation and video games.