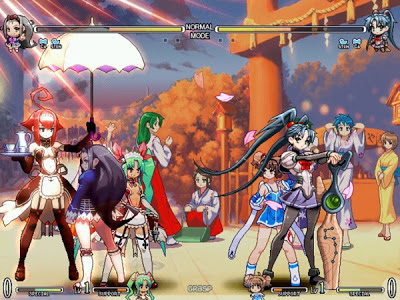 As we here prep for the madness that is the San Diego Comic Con, it's easy to forget that Anime Expo is less than two weeks away! eigoMANGA didn't forget as they just announced that you can beat each other up at Digital Manga's booth , #442. Also they will have a panel discussing the future of the game that started off as a one man effort.

Too bad we can't attend both AE and SDCC, maybe next year?

Read the press release after the jump.
From eigoMANGA:

'Vanguard Princess' is a 2D fighting game that features an all-female cast each with their own unique fighting style. The game is available for PC digital download via Digital Manga's eManga website.

The eigoMANGA development team for 'Vanguard Princess' will showcase and discuss new developments and future plans for the game.

Colleagues from eigoMANGA will announce and showcase releases of the company's productions and publications for the calender year.


'eigoMANGA Presents: How To Draw Manga And Portfolio Review':

eigoMANGA artists and editors will hold a workshop tutorial to teach the fundamentals of manga illustration and storytelling. They will also be on hand to critique portfolios from up-and-coming artists.